The View From the Taverna 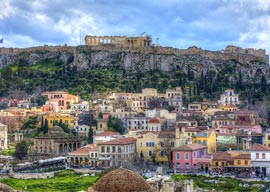 Nestled under the Acropolis, snug and safe among the ancient ruins of a long-ago grandeur, Plaka remains the only protected area of Athens, with greedy developers as welcome as a certain Minnesota dentist at an Aspinall animal sanctuary. Not that many don’t try. I see signs on old and battered but beautifully classical houses asking for bids “to develop.” No harm in trying, I guess. With the economy in the toilet—horrid word, but necessary—anything can happen, and Greek law has never been sacrosanct when the loot’s right.

Never mind. It’s 40 degrees Celsius, probably 50 under the sun on the marble stones on the hill across the Acropolis where I’m training. It is the Hill of the Muses, where the monument to Philopappus—a Syrian prince, an Athenian citizen, and a Roman consul—was erected around 100 A.D. He was a benefactor to the city, and the marble monument to him was used by the wily Venetian Morosini as a gun emplacement to fire on the barbaric Turks dug inside the Acropolis and using the Parthenon as a powder keg. Just below the monument there is a beautiful Byzantine wooden church where my parents were married in 1933. I train just above it, 50 mae geris, 50 yaku tsukis, and so on. The sweat pours down, the heartbeat races up, and at times I feel I am about to pass out from the heat. But I survive it day after boiling day, and feel refreshed afterward for some hell-raising as it gets dark.

“Greece was never an imperial power; hence, it owes nobody nothing, as they say.”

The best moments are at twilight, when the old-fashioned street lamps come on, forming a haze of dusky powder that illuminates the sacred rocks. More often than not I find myself on a roof taverna drinking chilled white wine just at that precise time of day. It is one of life’s very rare and precious moments, nowadays mostly ruined by the tourists and the migrants scrounging for a living in the shadow of the most perfect edifice the world has ever known. Migrants are the latest pests to invade Europe, as if the old continent didn’t have enough problems. The paper that reports only the news it sees fit to, The New York Times, recently had a front-page story about burglaries in ritzy Athenian neighborhoods. The reporting seemed fine until a lady who lives in Athens year-round pointed out that it was all true except for one important fact: Every single break-in that had been solved by the fuzz turned out to have been perpetrated by foreigners, mostly Albanians, with a good mix of sub-Saharans and Romanians thrown in. (But don’t expect the N.Y. Times to report that.) I suppose there are some Albanians who are not criminals, but as yet I have not met any. The only thing that stands between them and utter anarchy in poor neighborhoods is the youth of Golden Dawn, always referred to as a neofascist political party, instead of nationalist, because the party will not play ball with those who have brought the country to the state it is today. A few of Golden Dawn’s followers have made some extremely unfortunate remarks, things that have made it easy for the jackals of the media to paint the third-largest political party in Greece as neo-Nazi. Take it from Taki: The party’s strength lies in its youth movement and its incorruptibility, and it’s as neo-Nazi as UKIP. Greece was never an imperial power; hence, it owes nobody nothing, as they say. We are a small country with very few natural resources and we need more uneducated migrants like Monica Lewinsky needs a cigar advertisement.

Which brings me to the clowns who go by the name of Greek government nowadays. They are a mix of arrogance and false pride, people who think a T-shirt slogan is the equivalent of a well-thought-out policy. They came to power on a lie—that they would stand up to the bully of Brussels and the “Bitch of Berlin”—caved in after wasting six months showing off their bad manners around the European capitals, and now have fallen out among themselves over whether to accept the latest bailout. The ideologists of the Syriza party, veterans of corner-café wars for 40 years, espouse Marx and Trotsky as if this were 1922. Once Tsipras caved in and accepted terms that were even worse than those previously on offer, the extreme left of the party revolted. With the banks shut tight and the clock ticking, the economy simply stopped dead in its tracks. But the men without ties and certainly without manners continued to talk, and talk, and talk some more. As I write, they are still talking, just like they used to in the corner cafés they grew up in. (In the meantime, on Sunday, Aug. 2, a long program on German atrocities during World War II in Greece ran during prime time. It was on the government-controlled network, but I suppose it was a coincidence.)

From 2010 to 2013, 218,000 Greeks migrated, including 6,000 doctors. I hate to see the present figures. But the most preposterous and phoniest has stayed, and continues to stay—the man with that large hooked proboscis, shaved head, and motorcycle as a prop (no speedster, he): ex–finance minister Varoufakis, now reduced to advising tired old Marxists on colonoscopy and its benefits. What can be done to encourage this ludicrous narcissist to emigrate is a mystery. But I’ll keep trying.