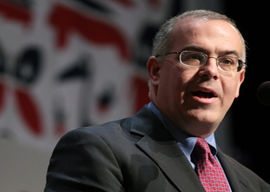 On June 13, the resident conservative (which means additional leftist) on The New York Times’ editorial page, David Brooks, revealed his plan for “national greatness,” which Brooks designates as the “Hamiltonian agenda.”

For those who may have forgotten, “national greatness” was a theme that Brooks’s pals Bill Kristol and Robert Kagan discussed at length in The Weekly Standard and Foreign Affairs in the 1990s. Back then this term meant a neo-Wilsonian foreign policy characterized by the militaristic promotion of our updated version of “democracy” and “human rights.” Although twenty years ago “national greatness” was not explicitly about glorifying our federal welfare state, it was implicitly about feeding a big government that could mobilize a contented population for war.

Brooks has filled in the vacant spaces by telling us what kind of “industrial policy” we’ll need in order to “avert national decline.” The two national parties, we are told, are useless for this purpose. The Republicans “use policies as signaling devices—as ways to reassure the base that they are 100 percent orthodox and rigidly loyal.” The Democrats “offer practically nothing. They acknowledge huge problems like wage stagnation and then offer…light rail! Solar panels!” While Brooks wants a “multifaceted reinvigoration agenda,” the two parties merely play to their bases while ignoring bigger issues.

“It is hard to imagine that Alexander Hamilton and David Brooks could have agreed on the nature of ‘national greatness’ or on anything else significant.”

Brooks’s alternative to the “two Soviet refrigerator companies, cold-war relics offering products that never change” is a variety of federal incentives that would presumably put us back on the right track. They include early childhood education (for the working class), more technical education, infrastructure banks, funds aimed at “research” and enabling people to start businesses, lower corporate tax rates, a simpler taxation system, and a more talent-oriented immigration policy. As one looks at this list of nostrums, two things become apparent.

One: Implementing Brooks’s “targeted basket” would put the federal government into citizens’ lives even more than it already is. In fact, much of this intervention looks like what Obama is now doing under a different name—for example, lavishing money on selected businesses and research projects and having the feds provide expanded opportunities for “the working class” and its children. Recommendations about what sort of immigrants we should aim at bringing here can have no effect unless we can seal our still-porous border with Mexico. We won’t be in any shape to make significant choices about immigrants until our politicians in both parties stop kissing up to La Raza and other Latino pressure groups.

Two: Wouldn’t it be simpler to leave money in the private sector than to have the feds collect and redistribute it? Libertarians and paleoconservatives have been asking this question for decades, but it remains relevant. Perhaps Brooks wishes to have the government collect our money and plan its use since he believes public administration manifests our “national greatness.” If our country is exceptional and praiseworthy, as Bill Kristol has pointed out, it is because our marvelous welfare state does so many things. National greatness is about the regime under which we live. As Brooks and his friends are aware, that regime is one that redistributes earnings and engages in massive social engineering.