The War Against Offensive Team Nicknames 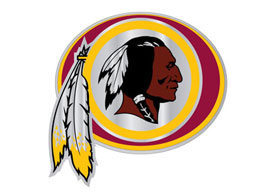 Offensive sports team nicknames are yet again in the news and, as usual, the Washington Redskins are the target of attention. Slate.com (owned by the Washington Post) has officially banned “Redskins,” though the Post itself continues to use it. President Obama added his two cents when he recently said that if he owned the team, he would drop the name, though Redskins owner Daniel Snyder adamantly defends it (my Washington friends, however, insist that “Redskins” refers to a variety of potato). One can only imagine Obama’s choice”The Big Spenders? The Trayvons? Sensing the pressure, the NFL recently agreed to meet with the Oneida Indian Nation, a group campaigning against Indian nicknames.

This brouhaha outwardly follows a familiar script”a few outraged lefties in a sea of indifference. Activists insist that “Redskin” is hateful since it hurts somebody’s (unspecified) feelings; the CBS account of this quarrel even compared “Redskin” to the infamous “N-word” spoken by African Americans”signifying contempt when used by outsiders but one of affection when employed by fellow tribe members. Does Obama, not being a Native American, say “the R-name” when discussing Washington’s NFL team?

“The left’s claims of offensiveness are really about securing the power to control the culture and the right to decide boundaries.”

Poll after poll finds that Indians themselves are generally not offended. In a 2004 National Annenberg Election Survey of Native Americans, 90% failed to find “Redskin” odious. It was the NCAA in 2012 that forced the University of North Dakota to drop its “Fighting Sioux” nickname by threatening banishment from post-season games and voiding all past victories. Ironically, but hardly surprising, many North Dakota Native Americans lobbied to keep the name and logo on the grounds that it reflected a positive image of the tribe. Even the Sioux Spirit Lake reservation voted to keep the name. This acquiescence is not unusual”Florida State University calls themselves the “Seminoles” and the local Seminoles hardly object. My buddy David Yeagley, an enrolled Comanche whose Indian moniker is “Bad Eagle,” proudly wears his Redskin jacket. He admires whites since, according to him, they beat the crap out of the Comanche despite his tribe’s deserved reputation for violence and over-the-top cruelty.

The issue of offensiveness is just a faÃ§ade. The real aim is the wussification of America. These “offensive” nicknames nearly all embody masculine, warlike virtues, and it is these virtues”not hateful stereotypes”that are the target of ire. It’s the Fighting Sioux! Chalk up yet one more leftist campaign to transform Americans into feminized sheep. The nickname campaign is just a close relative of the anti-gun movement, opposition to “violent sports” such as football, and the campus battle to eliminate fraternities (where, as everybody knows, drunk Neanderthal-like men regularly brutalize hapless, intoxicated coeds). Put medically, the goal is to lower the national testosterone level and already seems to be occurring judged by the sharp upsurge between 2001 and 2011 of US men receiving testosterone-replacement therapy.

The link between Indian nicknames and masculine warrior culture is most evident in military helicopter names. Apache, Lakota, Blackhawk, Chinook, and the Iroquois”all honor particularly violent tribes (and US missiles have included the Navaho and Tomahawk). It is inconceivable that the Ãber-macho Marines would call a gunship the Zuni, a tribe famous for its aversion to any conflict.

Ditto for college sports nicknames. Six schools call themselves Pirates, five are Raiders, 16 are Warriors, and nine are Spartans. Yes, some schools favor kinder, gentler appellations. For example, players for Mount Saint Mary’s College in Los Angeles are called Athenians, but all in all, college nicknames reflect aggressive traits (26 schools are Wildcats, 42 are Bulldogs, and 36 are Tigers). There are even seven Patriots and the University of Massachusetts still call themselves the Minutemen despite a student effort to replace it with something “less violent.” When Stanford was forced to drop the Indian moniker, “the student body supposedly selected “Robber Barons” (honoring founder Leland Stanford).” Alas, cowardly administrators overruled the students and instead chose the innocuous Cardinal, which may have inadvertently offended a few Catholics.