The War of the Cradle 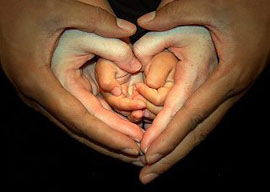 What has the recent hubbub over “contraception” really been about? On the surface, it’s all maneuvering for the 2012 election, but the passions unleashed, especially on the liberal side, suggest motivations that are more inchoate than tactical.

Few topics are more important than the quantities and qualities of future human beings. But the question of whom the government nudges to reproduce (or not) is a subject you are no longer supposed to discuss thoughtfully, so it mostly flares up as anger.

Reading through the hundreds of fuming comments from liberal readers of David Brooks’s amusing “Flood the Zone” self-parody in The New York Times about how we must overwhelm pregnant 14-year-olds with diverse social services, it becomes apparent there is a widespread desire among white progressives to Flood the Zone of poor black teens with…contraception. Lots and lots of contraception.

It’s reassuring that deep down, even liberals have common-sense apprehensions about population control. They vaguely grasp that after a half-century of expensive exertions, we’re still pretty clueless about how to solve the problems caused by 14-year-old black girls having babies; therefore, let’s figure out ways that they will have fewer babies.

“It’s reassuring that deep down, even liberals have common-sense apprehensions about population control.”

Still, you aren’t supposed to say this. Many progressives don’t seem capable of consciously thinking this anymore. Thus, public discussions go off on irate tangents.

Being furious at the Catholic Church over its anti-contraception stance at least serves as an old-fashioned outlet for white liberals’ sublimated crimethink. The influence of Pope Paul VI’s 1968 Humanae Vitae encyclical upon 2012 African American teenagers is not immediately obvious. It didn’t seem to have had much impact on married Catholics in the late 1960s other than to remind them to ask their doctors for The Pill. Still, raging at the Vatican gives NYT readers a traditional target to hate while venting their powerful emotions about who is having babies and who isn’t.

In the 20th century, population was a public issue, both environmental and ethnic. It was the central flashpoint between the dominant Protestants and the fast-growing Catholics. The 1983 film Monty Python’s The Meaning of Life contrasted the traditional views of Catholics (“Every sperm is sacred”) and Protestants (“Look at them, bloody Catholics, filling the bloody world up with bloody people they can’t afford to bloody feed.”)

In mid-century America, Catholics were torn between two strategies:

• Assimilate into the successful Protestant American template by striving for respectability;
• Grow their own voters through large families, just as the Catholic Québécois pursued the Revenge of the Cradle in Canada and both sides are attempting to do in the West Bank today.