The War Within the States 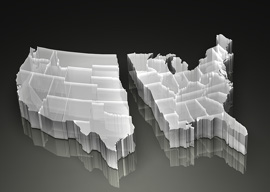 The sovereign people of these United States have spoken. Barack Obama has been reelected president of the Republic, and the Man from Kolob has been sent on his way. I would not have been much happier had Romney won. But Republicans may take comfort in the fact that they will have no responsibility for the next four years” events, unless the Mayan calendar puts us all out of our misery on December 21. That might be best for all of us.

The problem is that our head of state is inheriting a bankrupt nation from himself”though said bankruptcy has been decades in the making. In such a position, governments generally either: a) inflate the currency; b) deflate it into a depression; or c) go to war. For reasons known best to themselves, modern rulers seem to prefer the last alternative. I fear that His Excellency may feel compelled to follow in their train”we”ll need a lot of bayonets and horses to break through to Tehran.

Infanticide and alternative matrimony shall become ever more prominent, and those who oppose such things will be increasingly uncomfortable. No doubt the Catholic Church’s struggles with the state will increase. Still, given that a majority of those claiming to be Catholic voted for Obama, it must be said that these worthies will reap what their predecessors in the purple sowed in terms of poor moral and political leadership.

“It is not merely the country as a whole that is severely divided. Each of the states is, too, and that does not bode well for the future.”

It is a gift from above that Obama defeated his rival handily in the popular as well as the electoral vote; otherwise it would be the turn of so-called “conservatives” to advocate abolition of the Electoral College. The left has long called for the College’s abolition based on the notion that it is undemocratic. It would have been sad to see historically ignorant Republicans embarrass themselves by echoing this rant. Since the 1913 change in the Senate’s makeup, the College has been the sole effective constitutional remnant of the states” sovereignty.

Speaking of the states, the electoral map for 2012 appears to reveal the formula for a new War Between the States, with the Old Confederacy (save Virginia) and most parts of the Great Plains and Great Plateau states pitted against the Northeast and the Far West. But when you look at a map of how the counties voted, the pattern is more complex. The cities, together with rural counties of primarily black, Hispanic, or Indian populations, went for Obama. The white rural counties tended to go for Romney regardless of the state. It is not merely the country as a whole that is severely divided. Each of the states is, too, and that does not bode well for the future. The Republicans could reach out to minorities on social issues: In 2008, California’s mostly Hispanic Imperial County turned in the Golden State’s highest majorities for both Obama AND Proposition 8. But since the GOP’s leadership does not really disagree with the Democrats”whatever their base may think”this is a resource that will remain untapped.

Here in California, the 2012 election proved that all is well in this Happiest Place on Earth. Not only did our undead governor get his tax proposition passed, the Democrats won a supermajority in the state Senate and appeared about to do so (there are still three undecided seats) in the Assembly. Having over two-thirds of both houses will allow them to tax anyone or anything they wish with abandon. Still reeling over their ban on foie gras, I can only imagine what the legislators will do with their newfound freedom from restraint. Even if business continues to leave the state in droves, Sacramento will be a fun city indeed.

Los Angeles County had a few propositions of her own, of which the most exciting was Proposition B. Taking the porn industry under its maternal wing, the county under this measure requires that sex-industry workers wear condoms and that film sets are subjected to inspection by county authorities. Opponents replied with libertarian arguments. No one questioned the morality of the trade itself, since years ago a court ruled that while having sex for money without a camera was prostitution, doing it with one was not. One supposes that smart hookers keep their cell phones in photo mode. The proposition passed overwhelmingly.

So what are we to make of our deeply divided nation? The evil-minded would declare that we have become a country consecrated to infanticide, sodomy, confiscatory taxation, and foreign wars. The good and virtuous would maintain that we are an enlightened nation that has safeguarded reproductive and civil rights, are about to force the rich to pay their fair share, and are trying to spread democracy throughout the world. The separation between these two narratives grows greater every day. I fear the effect that national bankruptcy may have on these fault lines.

Countries and cultures come and go. It may be that the United States is on its way out, Mayan calendar or no. We leave behind some good”if not spectacular”contributions to world civilization: the Broadway musical, the Golden Age of Hollywood, and jazz come to mind. They”re nothing on the level of Roman law or Greek philosophy, but they”re worthy achievements nevertheless. There are worse things to leave behind, as the Carthaginians could tell you.