The Wasp Woman’s Weapon Was a Wasp Waist 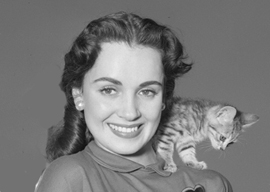 NEW YORK—I walked down 8th Street yesterday, past the jumble of little secondhand shops and shoe stores and stand-up lunch counters and trendy bodegas, looking for the place where Susan Cabot was discovered. It was a club called the Village Barn—little more than a restaurant with a hillbilly theme—and I’m sure she was probably the only actress ever discovered there. It wouldn’t surprise me if she were singing country music long before it became fashionable, in 1949, the year a Columbia casting scout named Max Arnow walked in and fell in love.

Men were always falling in love with Susan Cabot, and Susan was always letting them. She was one of those women who really deserved the term “irresistible,” a petite effervescent brunette who was barely five feet tall and a hundred pounds, with what fashion designers used to call a “wasp waist” (18 inches or less). More on that irony later. She was one of those women so sexy that it starts to be classified as a handicap. Case in point: She was still turning up in the news last week—31 years after her death—as the woman used by the CIA in 1959 to make sure that Jordan’s King Hussein had “female companionship” during his visit to the United States.

I never met Susan Cabot, but I’ve met quite a few people who did know her, and I feel somebody needs to defend her right now.

Despite the sleazy scum associated with this story—chief among them Robert Maheu, the government agent turned shill for Howard Hughes—there was no prostitution involved. Maheu asked her to go to a party and sit across the table from Hussein. (She was 31 at the time, one of the most beautiful women ever to land on a Hollywood soundstage, and without a doubt could have easily seduced the sheltered 23-year-old Muslim monarch with mere smiles and glances.) I’m sure that Maheu told his ex-colleagues at the CIA, “I told her to go to bed with him.” I’m equally sure that the king had told the CIA, long before he traveled to Los Angeles, that he wanted to meet women. I’m reasonably certain that Susan Cabot was targeted as “most likely to hook up with the king” because of (a) her recent history of dating younger men, (b) the fact that she was on the B list, and (c) her appearance in the tabloid gossip columns as being escorted by various men to various supper clubs and switching men every two or three months. Susan liked men, and men liked her.

“My friends scoff when I say Susan Cabot was a feminist, but she was.”

I also think she fell in love. She was still calling King Hussein “the most charming man I ever met” two decades later. They undoubtedly had assignations beyond the ones described in the declassified CIA memo at a government-arranged beach house on Long Island. She undoubtedly bore King Hussein’s child. (We know this because of documents released at her son’s murder trial revealing that she received $1,500 a month from the Keeper of the King’s Purse in Amman throughout the boy’s life.) In other words, King Hussein and Susan Cabot had a hot doomed affair—she was Jewish and divorced, so a future together was out of the question—that they both embraced with enthusiasm.

But the galling thing about this story is that it just adds to her mythical reputation as the crazy Wasp Woman.

Every article describes her as “the B movie actress who starred in The Wasp Woman.”

First of all, for those of you who don’t follow these things, The Wasp Woman was a 1959 quickie for American International, dashed off by exploitation movie legend Roger Corman, that is considered horrible even by people who love Roger Corman. Focusing on this throwaway programmer—a clichéd fountain-of-youth/Dorian Gray story that has been handled much better in other forms—is to ignore the fact that, without Susan Cabot at its center, there’s no movie at all! This turned out to be her principal skill in Hollywood—to take abominable material and do something with it.

And that’s what most actors have to do. To this day aspiring actors come to New York, enroll in the Method studios (two scene classes a week, partner rehearsal every day, eight girls, eight guys), and wait tables or do legal transcription while waiting for something to show up. In most cases the only thing that shows up is an unpaid Off Off Broadway gig requiring extensive rehearsal for eight performances—a chance for “exposure.” One step beyond that is a lead part in a student film—great if it’s New York University, not so great if it’s New York Film Academy. And one step beyond that is a cheap movie with a good director.

Susan Cabot—born in Boston, raised in eight foster homes in the Bronx—was one of those actors, and she was constantly creating nuance from a blank sheet of paper. As soon as she got to Hollywood, she was cast as a Polynesian girl—a younger version of Dorothy Lamour in a sarong—in a forgettable Columbia film called On the Isle of Samoa starring Jon Hall, trying to extend his career as a likable adventurer.

For reasons that escape me—since she could easily have been used as a young Paulette Goddard—this one part typecast her as an exotic. She would steal scenes from Yvonne De Carlo as a Cheyenne girl in Tomahawk (1951), lure men to their deaths as a dancing girl in Flame of Araby (1951), go Indian a second time as the pregnant wife of Cochise (Jeff Chandler) in The Battle at Apache Pass (1952), and play a rare “good girl” as the tomboy second female in the Don Siegel Western The Duel at Silver Creek (1952).

Continuing her talent for upstaging the female lead, she would completely overshadow Piper Laurie as a fierce female archer in medieval Persia in the laughable Son of Ali Baba (1952). This is the movie best known for revealing the deficiencies of the Universal dialect coach, who couldn’t get Tony Curtis in shape as the Persian hero, leading to the famous scene where the Bronx-born Curtis proclaims, “Yonda lies da castle of my fadduh!”

In other words, she was a confirmed party girl. She liked supper clubs and she liked dancing. (While learning her sexy dance for Flame of Araby, she told choreographer Hal Belier that she didn’t think she was moving her feet correctly. “With a figure like yours,” replied Belier, “the only person who’ll look at your feet will be Arthur Murray.”) So it was not that big a surprise when she opted out of her seven-year contract at Universal and returned to New York at the invitation of best-selling novelist Harold Robbins to star in the stage adaptation of his 1952 novel about a Jewish boxer, A Stone for Danny Fisher.