The Wave That Won”t Break 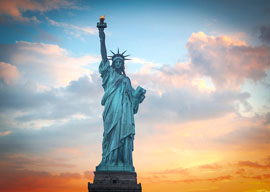 Nobody has ever conclusively deciphered the meaning of that memorable sentence. Her descendants couldn”t recall her previously expressing anti-Columbianism.

My guess, however, is that this was one of those random memories that bounce around in the minds of the very old. Perhaps my wife’s grandmother, who was born in Chicago in 1908, was echoing her Italian-born mother’s private view of immigrating to America: If only Christopher Columbus had minded his own business and not discovered America, she never would have left her beloved Italy.

Ellis Island-era immigrants to big cities like Chicago didn”t face the challenges of settling the American frontier. But the psychological costs still must have been high.

Granted, Chicago was much richer than Italy. But to newcomers it must have lacked in the peculiar sweetness of Italian life. In Chicago, the food was abundant but crude; there was a shortage of scenery, a harsh climate, a baffling new language to attempt to learn as an adult, and the strange, cold customs that the self-confident natives insisted the newcomers adopt.

The Protestants dominated the business world and the Irish ran the Catholic Church, and neither was at all inclined to apologize for their privileges.

Historian Susan J. Matt’s superb 2011 book Homesickness: An American History makes clear how much 19th-century individuals suffered emotionally from being away from their loved ones, and, in contrast to today, how much institutions recognized the toll taken by relocation. For example, during the Civil War the Union army listed 74 soldiers as having officially died of “nostalgia.”

“It’s important to understand how much technology and cultural change have mitigated the loneliness and stringencies of the immigrant experience.”

For immigrants from Italy, with its pungently distinctive and delightful (if inefficient and often infuriating) culture, life in America could seem like a joyless exile.

A vacation back to Italy was a dream decades away. A photograph from home might come once every few years, and even getting an answer back in reply to a question could take a couple of months for the letters to make the round trip.

Not surprisingly, 35% of Italian immigrants gave up and went back to the old country permanently.

When American elites think about immigration in the 21st century, they tend to flash back to family stories of how hard their Ellis Island ancestors had it, and therefore assume that only ignorant bigots would worry about just how many of the over 7 billion people in the rest of the world might attempt to immigrate to America without strong government policies limiting the influx.

For that reason, it’s important to understand how much technology and cultural change have mitigated the loneliness and stringencies of the immigrant experience.

Jetliners are much more convenient than steamboats and make vacations back home affordable. Modern logistics means home-country groceries are readily available. Satellite TV implies that you don”t have to give up watching your favorite shows just because you”ve moved to the other side of the world.

And it’s not as if modern Westerners will dare insult you for your backward customs such as dressing your daughters in tents. The more hostile your ethos, the more masochistic Western elites will welcome you.

Staying in touch with your relatives is now a given. WhatsApp, which Mark Zuckerberg paid $19 billion Facebook bucks to acquire in 2014, makes unlimited telecommunications more or less free for anybody with an internet connection. Farhad Manjoo reported:

People who have been in the United States for decades told me that WhatsApp has eased the feeling of isolation and longing that is inherent to being an immigrant.

It’s designed to be simple enough for mature illiterates to learn, and thus WhatsApp has become the mainstay of immigrants uninterested in assimilating to their new countries.

A recent New York Times article about a refugee Syrian shepherd in Canada notes that his illiterate wife isn”t bothering to learn to speak, much less read, English because WhatsApp keeps her connected to her extended family drama back in the Levant:

Ms. Hajj, however, often stayed up for much of the night to converse with relatives seven hours ahead, growing weepy and exhausted by dawn. Like many of the relatives, she had never learned to read or write, so they used WhatsApp to volley short voice recordings. Those messages felt like a lifeline, and the ones that were not harrowing were comforting: greetings for the Eid al-Adha holiday among her 16 half and full siblings, and a running whose-baby-is-cuter photo contest….

She often seemed more connected to the electronic constellation of relatives back home than to the Toronto streets she did not know and the English signs she could not decipher. When the sponsors tutored her in English, she often yawned through the lessons.