The Way of Che 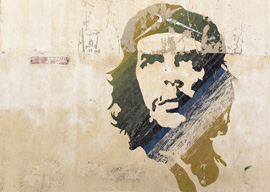 The Irish Post Office has issued a stamp to commemorate the fiftieth anniversary of the death of Ernesto Guevara. This is, presumably, because he was both very famous and had some distant Irish ancestry. It is, however, a rather sinister philosophy that the worth of a man’s work or ideas, or his influence on the world, is much affected, either for the better or the worse, by his distant ancestry.

Guevara’s reputation is, of course, the triumph of marketing over truth and reality. There is probably no resort of mass tourism in the world where Guevara kitsch is not on sale and, one must presume, bought; and in an odd way this is only appropriate, for mass tourism makes lemmings seem like unreconstructed individualists, and Guevara was nothing if not an ardent promoter of mass conformity and unthinking obedience. Like many an adolescent psychopath, as he remained all his life, he dreamed of making mankind anew—not in his own image, exactly, for he thought of himself as a leader rather than a follower, but according to his own far-from-profound ideas of what mankind should be. The triumph of marketing is to have made this apostle of the most complete servitude into an apostle of the most complete freedom.

The triumph of marketing over truth and reality is nothing new, however. To expect people who are trying to sell you something also to tell you the truth, the whole truth, and nothing but the truth is to expect what never did happen and what never will happen. The buyer will always have to beware, no matter what legal protections are put in place for the unwary; the necessity is inscribed, as it were, in human nature itself.

“The buyer will always have to beware, no matter what legal protections are put in place for the unwary.”

A few years ago, I did some research on three early Victorian murders that caused me to read several provincial newspapers of the time. I discovered incidentally to my research that the owners or editors of about half of the British provincial newspapers also sold patent medicines; and this made perfect sense, for by far the greatest advertisers in provincial newspapers were the manufacturers of patent medicines. The owners or editors of the newspapers sold advertisements to the producers of patent medicines, then they sold the newspapers in which the advertisements appeared, and finally they sold the products themselves to the readers. It was an excellent example of rational commercial synergy. (About half of the medicines, by the way, were either to cure or to prevent syphilis—a disease, then, that was a great support to the press of the time.)

Now, the principal quality or characteristic of the sellers of patent medicine has always been effrontery, that is to say the blatant insinuation of the false. Thomas Holloway’s innovation was to insinuate such falsehood on a mass or industrial scale. There was hardly a newspaper in which he did not place a weekly advertisement; moreover, he pioneered the advertisement that masquerades as news story. He would ensure that reports of miracle cures in faraway places, supposedly wrought by his pills and ointment, and written as matter-of-factly as possible, were placed in every newspaper, reports whose veracity no one could possibly check for himself, of course.

As Napoleon once said, repetition is the only rhetorical technique that really works—besides which hope and fear render people susceptible to effrontery. In Thomas Holloway’s time, the fear of illness was often, and the hope of cure rarely, justified; at least Holloway’s preparations were unlikely to do much harm (they contained aloe, myrrh, and saffron), unlike the prescriptions of the orthodox doctors of the time. They allowed for the possibility of natural recovery, whereas orthodox medicine often hurried its consumers into their graves. Nevertheless, the claims Holloway made for his ointment and pills were preposterous, and something is not curative just because it fails to kill.

Holloway made an immense fortune by his effrontery and founded a women’s college in the University of London on the proceeds.

Since his day (he lived from 1800 to 1883, dying in the same year as Karl Marx), effrontery has made great strides as a key to success in life, and indeed quite ordinary people now employ it routinely. There are consultants in effrontery training who not only commit it themselves but teach others how to commit it, and charge large sums for doing so. There was a time when self-praise was regarded as no praise, rather the reverse; but now it is a prerequisite for advancement.