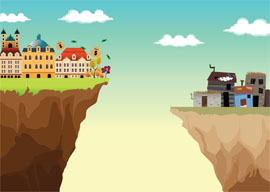 The claim by Oxfam, the charity that so loves the poor that it is safe to predict that it will never abolish itself no matter how rich humanity becomes, that the eight richest men in the world own as much as the poorer half of the whole of humanity combined, is at first sight extremely startling. Assuming the claim to be true and meaningful (which I doubt that it can be, for a number of reasons), who would not react with unease, with the feeling that there must be something profoundly and fundamentally wrong with the way the world is organized, or at least functions, economically? And that, of course, is precisely what that statistic is supposed to do.

Let us, then, spread the whole wealth of the eight richest men and thereby make the world a juster place. This would leave the 3.6 billion poorer half of humanity about $120 a head better off. For a family of eight in Bangladesh, say, this might be a considerable boon for a time: Extra money has a large marginal utility for the poor, at least if it is not reduced by equivalent inflation. And $120 would represent a 12 percent increase in the per capita GDP of Bangladesh”for a year. Of course, there might be certain difficulties in the disbursement of the money to the poor in Bangladesh: Its native multimillionaires, a couple of whom are in government, might get in the way, to say nothing of the other difficulties too numerous to mention.

“In its present form, Oxfam’s propaganda is an incitement to envy, one of the seven deadly sins.”

The sale of all the richest men’s stock at once would reduce its value drastically, of course, but let us overlook that. If, instead of receiving the whole capital value of that stock at its present nominal price at one go, it was vested in the poor half of humanity, each of the world’s poorest would receive, if they were very lucky, six dollars a year each, less the costs of distribution. This would represent less than a 1 percent increase in the per capita GDP of the supposedly poorest country in the world, the Central African Republic.

Underlying the Oxfam statistic is what might be called the cake model of economics: My slice of cake is one slice less to be distributed to everyone else, and therefore, if my slice grows, everyone else’s must reduce. By developing Windows and becoming incalculably rich thereby, Mr. Gates deprived me of wealth that is rightfully mine”or would have been mine if I happened to be among the poorer half of the world’s population. (As it happens, my wealth, though much less than immense, would have to be shared out too, because on Oxfam’s reasoning it is perhaps two or three thousand times that of people in the poorer half of humanity. My only defense is that the ratio of Mr. Gates” wealth to mine is ten times greater than the ratio of my wealth to that of the poorest 3.6 billion people. This takes no account of marginal utility: I can afford to eat as well as Warren Buffett, despite his immensely greater wealth, and to judge by his public expressions of his dietary preferences, in practice I eat a great deal better than he. By contrast, the poorer half of humanity cannot afford to eat as well as I.) In fact, Mr. Gates enriched me.

Let us suppose (what is highly unlikely) that I invented something useful that sold very well because it was just what people needed, though they didn”t know until I invented it that they needed it, invention being the mother of most necessity. This invention would make me immensely rich, very much richer than I was before. Whom would I have impoverished by my invention?

Perhaps a Luddite would reply that I had reduced the demand for labor in some way, or alternatively my invention has replaced something else, the manufacturers of which have now to go out of business, causing unemployment and therefore hardship. But this is to assume that there is no really new thing under the sun, and that the sum total of goods and services remains always the same, it only gets shared round in different ways. The railways and motorcars put horse-carriage builders out of business, and so on and so forth.