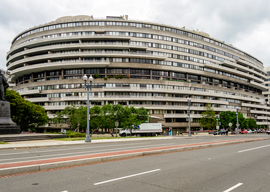 People get breathtakingly angry when they think they”ve gotten away with something … and then they don”t. The more time has passed between the deed and the discovery, the greater the shock to one’s system. And the fear you feel as the truth starts breathing down your neck converts to rage as easily as the gas in your getaway car turns to hot, dirty air.

It will be four decades next month since Richard Nixon became the first and only U.S. president to be convinced to fork over the Oval Office. And just in time for the big anniversary, a small rash of “revisionist” books about the Watergate burglaries is annoying the snot out of John Dean again.

John Dean is the hero of the official histories: a White House insider who had a change of heart, he became the star witness against the Nixon administration, and was lionized by the press as a brave defender of truth and apple pie (and getting himself a nice reduced sentence despite his involvement).

But an alternate set of historians has him down for the guy who may have ordered the break-ins and wiretaps in the first place, who sold out to save his tail when the game went south”and whose wife was close friends with the madam who was supplying hookers to the Democratic National Committee office at the time of the events.

“Most politicians of the era were guilty of spying on each other and placating or using the mob, the same dirty dealings Nixon was reviled for. He was the one who got “caught””caught trying to cover up a mess he may not have even made.”

Phil Stanford, a true crime author, had been thinking about writing an off-the-reservation Watergate book for twenty years before he found his angle: What about those mysterious call girls and the DNC? The result of his inquiries became White House Call Girl, released in paperback last month by Adam Parfrey’s Feral House.

Conventional historians have never told us what, exactly, the Watergate phone taps and surveillance missions were supposed to be fishing for in the first place. The official answer is an unsatisfying “Political stuff about the Democrats that was bad.” According to Stanford’s narrative, the bad stuff was hookers. An ex-stripper and money runner for the mob named Heidi Rikan was running a call girl operation near the Watergate apartment and office complex, and these girls serviced the needs of the DNC headquarters located within. The wiretaps at the DNC were put in place to record Democratic politicians booking dates with these women, so as to create a dependable supply of smear and blackmail fodder.

Many have worked and written on the call girl narrative, but Stanford realized that no one had done much to flesh out the mysterious Heidi’s life story, nor those of her friends and associates. He set to it, determined to make the piles of facts and historical details into a page-turning story.

Heidi died in 1990, but Stanford tracked down her sister Kathie”who may also be her daughter, as Heidi was used sexually by their father as a teenager”and Kathie granted him a history nerd’s dream. She produced Heidi’s little black book, filled with names of the mighty, from NFL players to mobsters to politicians.

Valuable as those leads were, Stanford also sought information about Heidi’s old female friends and roommates … one of whom, unfortunately, was the woman who would become John Dean’s wife, Mo. When Stanford came to the Deans” home last year asking if he could talk to Mo about Heidi Rikan for his book, Dean sent him on his way, saying Mo was recovering from surgery.

Dean was not pleased. While Feral House was preparing the ebook version of White House Call Girl last summer, Dean”as strong and silent in his innocence as ever”sent them a five-page threat letter warning that should they print the book, or even if they so much as published the threat letter, they would face his legal wrath. Feral House took this seriously; in 1991, when “revisionists” Len Colodny and Robert Gettlin wrote Silent Coup, Dean did in fact drag them to court.

So Feral House hired an attorney, who wrote back to calmly inform Dean that they had every right to publish not just the book but his threat letter as well; they did so here. (The legal material is a good read, if you”re into unreliable narrators.)

The ebook boldly came out in 2013. Unfortunately, says publisher Parfrey, most journalists who might have covered it were frightened off by Dean. But the new White House Call Girl paperback, bolstered by new material”and the fact that Dean has not in fact brought suit in this case”will, perhaps, fare better.

Small wonder Dean wanted this story pounded into the mud; the picture Stanford’s version paints of him isn”t pretty. He was fired from his first job after law school for backstabbing his own firm’s client in favor of a competitor, foreshadowing later, bigger betrayals. Despite the firing he went straight into government”perhaps thanks to his first wife, a Congressman’s daughter”and eventually became the White House lawyer. The job wasn”t as high-status as it sounded, so (the revisionist narrative alleges) he tried to make himself indispensable to the administration and get the president’s attention by pushing surveillance schemes against the Democrats. When the Watergate burglars were caught and the plot blew up in his face, Dean cut a deal with prosecutors at the expense of his confederates as well as the president.

Though Stanford says he wanted his book to read like a good, juicy novel”and it does”it’s also meticulously documented, and builds on the work of other revisionists who have been at work over the years. His investigation into the players” personal lives yielded valuable new details that bolster his historical narrative, proving hunches and pinning people in the right place and time. Before the copious endnotes, the book is only 151 pages long, but Stanford’s compact, bluster-free style packs every page with facts.

About those juicy parts: whichever Watergate narrative you believe (if any), there is ample reading pleasure here, similar to the filthy voyeuristic fun of a gruesome Hollywood bio. But while the chapters focusing on Heidi do have a slight “troubled star” pulp feel, they”re more plot-driven than lurid, written with few frills and a subdued wit. And instead of a simple tumble from rising star to potbellied B-movie drunk, we get a strange climb from victim to politically caustic high roller (well, and then drunk).

Stanford’s depiction of John Dean’s wife-to-be Mo is strikingly different in tone from that of a hagiographic 1987 write-up in the LA Times, touting the novel Mo wrote about Washington wives. The two accounts take many of the same facts (Mo’s father died when she was 17, for example, and once she accidentally married a married man) and massage them quite differently.