The Week in Art: From Basel and Beyond 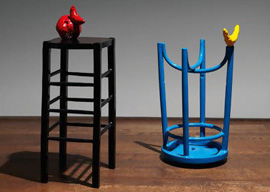 Sandwiched between two nudes at Sean Kelly’s booth, I was forced to choose between turning toward the naked woman or the exposed man. A highlight of Art Basel this year was Marina Abramovic’s Imponderabilia, a performance piece where a woman and man stand nude and motionless at either side of a doorway. Originally enacted by Marina and her partner Ulay in 1977, this nude gateway defies the idea that galleries typically bring purely commercial work to art fairs.

Art Basel remains the must-visit fair to scores of galleries, dealers, collectors, and many a sycophantic follower who make pilgrimages to Basel to discover something new. The festival again managed to attract the big stars and devotees of Contemporary Art, who were seemingly undeterred by the present global economic crises.

The saturnalia of artwork on offer by 300 galleries from 36 countries was as impressive as ever. Gagosian was said to have shipped over an estimated $250 million of works for his booth, comprising over 10% of the entire fair’s value. The first day’s sales were led by a monumental 1986 Gerhard Richter abstract painting at Pace Gallery’s booth (asking price around $20 million) and a 1981 bejeweled portrait of the artist Joseph Beuys by Andy Warhol at the stand of New York dealer Acquavella.

“Consensus agrees that this year’s edition of Art Basel was one of the best yet.”

Although galleries on the first floor reported successful sales, they were more modest in volume than that of their counterparts, who were shunned to the less desirable second floor. Could this be a sign of the times or of the voracious market appetite for younger art? Upstairs”where mostly primary artworks were being sold at comparatively lower prices”the reported sales volume significantly outshone that of downstairs. Could upstairs become the new downstairs?

Another quiet giant was Art Unlimited. This wonder room of oversized artwork is a personal favorite that the fickle often overlook. At one end of the vast building, Gagosian presented Franz West’s leviathan bubble-gum-pink intestinal sculpture GekrÃ¶se alongside Richard Jackson’s gargantuan fuchsia Big Pig. Art Unlimited’s delectation of pioneering exhibitions for projects that transcend the classical art-show stand offered a welcome respite from the main hall of harried booths. One of the best video projections was Tony Morgan’s Resurrection. Depicting the life cycle of a steak shown backward in time on a 10-minute loop, it retained a continuous throng of viewers and demonstrated that art needs to be experienced

At the bacchanalia of dinners, cocktails, and late-night parties the talk of the town turned to New York dealer Tony Shafrazi, who chose to devote his booth to an exhibition of his own artwork. His brightly colored wall pieces juxtaposing dÃ©collage with banal text were priced at $50,000 to $150,000. This divergence from the norm and Duchampian amalgamation of artist/gallery owner may have jeopardized Shafrazi’s future participation at Art Basel, as rumor has it he may have blackballed himself forever.