The Week in Canadian Sex News! 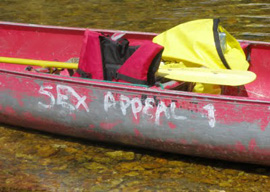 Canada’s prolific pop historian Pierre Berton quipped: “A Canadian is someone who knows how to have sex in a canoe.”

I know: That’s dumb and not funny. We’re usually funnier. That line only got funny when someone (likely a foreigner) finessed it:

Drinking Budweiser is like having sex in a canoe: It’s fucking close to water.

The climate discourages scanty fashions and potentially arousing parades of public nudity. Except for our numerous supermodels (and sometimes not even them), we’re a homely race of people.
Most of us would rather have sex with a canoe than each other. When the subject makes national news, it’s never one of those cringe-inducing British-style scandals à la Profumo. The closest we’ve had to one lately was—I’m serious—a cabinet minister leaving his briefcase on his girlfriend’s coffee table.

I’m not sure what this inadvertently reveals about our elite media, but headline-making naughtiness trends toward what might be termed “spectator masturbation”—intercourse once removed, more recreational than reproductive.

“When you hear the word ‘Canada,’ chances are that ‘sex’ isn’t the first thing you think about.”

Then this month, the court unanimously ruled it a “violation of addicts’ basic rights to life and security” to deny them access to “drug rehabilitation at no charge.” Ha! Just joshing: That should read “free heroin.”

Experts say “the ruling’s logic” (I know…) may apply in a prostitution case now making its way to the court. Like abortion and pot, prostitution is legal in Canada, but:

…most related activities, such as advertising services or living off the proceeds of prostitution, are against the law.