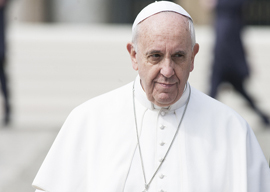 POLISH MAGAZINE COVER DEPICTS MUSLIM HANDS GROPING EUROPEAN WOMAN
A reputedly “far-right weekly” in Poland has engendered screams and yelps and howls of racism for a recent cover depicting a highly distressed white woman swaddled in the Flag of Europe and being groped from all sides by sweaty, swarthy, stinky, greasy brown hands.

The magazine, wSieci (”Network”), featured articles such as “Does Europe Want to Commit Suicide?” and “The Hell of Europe.” The publication was accused of “deliberately arousing public fear,” because of course the European public has no right to fear its women being raped and its ancestral homelands and culture being forever demolished by invading Mohammedan hordes, even though that’s precisely what’s happening.

BORED FLORIDA MAN DIALS 911 TO TALK ABOUT HITLER
Florida authorities say that 28-year-old Michael Gilman has been arrested and charged with misusing the 911 system after he allegedly dialed the service multiple times to chat about Hitler and the Jews. Upon being arrested, Gilman allegedly told a policeman that he made the calls because he was “bored.”

BUZZFEED: WHITE MALES NEED NOT APPLY
A few months ago we wrote about a fat ugly female tapir who felt the need to announce to the world that she doesn’t date white men, as if any white man in his right mind would desire her in the first place.

Now comes word that an even fatter and uglier female tapir editor at the massively popular website BuzzFeed put out a call for writers while specifying that she “would particularly like to hear from you if you are not white and not male.”

Reacting to the understandable reaction, the fat ugly tapir in question, Scaachi Koul, doubled down and made the following tweets:

Koul’s final tweet referred to white people as “pale demons” before her account was suddenly yanked on Saturday.

ANTI-WHITE VIOLENT ASSAULTS OF THE WEEK
Last Tuesday a black male from Staten Island pleaded guilty to a hate crime for his part in an assault on a white male in Staten Island last summer that was partially captured on camera. Raymond Banks was part of a mob that assaulted a white male while his group shouted things such as “You white piece of shit! You white cracker! You’re in the wrong neighborhood!” as they “threw a garbage can, a fluorescent light tube, and a milk crate at him.”

And in Washington, DC, last week a decorated white Iraqi war veteran was allegedly beaten, robbed, and knocked unconscious by a black mob at McDonald’s who pounced on him after grilling him about whether “black lives matter” while he was quietly trying to eat his meal.