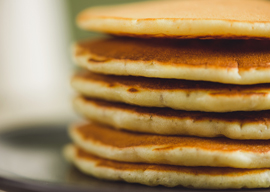 The Week’s Most Illicit, Complicit, and Explicit Headlines

PANCAKKKES OF HATRED
Eating pancakes for breakfast is an American tradition—just like slavery and lynch mobs.

That’s why it is with a sense of deep personal emotional pain that we report a black waitress at a Texas IHOP recently endured the ghastly site of uneaten pancakes that she says four evil white-male teens from a local high school had conspired to carve into the most heinous three-letter combination in the English language—namely, “KKK.”

At the moment I’m like I don’t believe this. I’m seeing this wrong. So I went to the tables at the front and said what do you see on this plate? What letters are these? And they said KKK. And I said, ‘I thought so.’…They just crushed my spirit. I didn’t know what to do after that.

After her momentary bewilderment, Ballard took matters into her mahogany-colored mitts. She snapped a photo of the Hate Cakes and promptly posted them on social media, to the shock and dismay of black Americans and the good white people who fetishize them from a safe distance in different zip codes.

The local school superintendent decried the incident and explained that America is not a country where it is appropriate for people to take basic pancakes and twist them into what is essentially a racial death threat.

“Eating pancakes for breakfast is an American tradition—just like slavery and lynch mobs.”

We wish Tenasha the very best in her new career as a professional hate-crime victim and hope with every last gummy fiber of our souls that this incident doesn’t turn out to be another hoax like the lesbian waitress in New Jersey or the black waitress in Tennessee who faked hate crimes against themselves.

To rectify this unfortunate situation, Thai men have been attending a Bangkok hospital to have their penises whitened. A representative for the Lelux Hospital claims that they began offering the treatment about six months ago after a male client bemoaned the “dark parts” of his crotch. At the moment, allegedly 100 Thai men request penis whitening at the hospital every month. To perform the procedure, surgeons reportedly “use a very small laser.”

BOY CHARACTER WEARS GIRL’S CLOTHING ON REVAMPED ROSEANNE
After starring in the mega-successful sitcom Roseanne from 1988 to 1998, Roseanne Barr hasn’t done much beyond dressing as Hitler to bake cookies.

Now that the show has been reborn, Roseanne’s dykey daughter Darlene (Sara Gilbert) has undermined rampant suspicions about her sexuality by popping out a nine-year-old son who dresses as a girl but isn’t gay or transgender—he’s just a little boy who likes to wear girls’ clothes, because according to Gilbert, that now “represents the world” rather than an absurdly tiny minority of gender-confused prepubescents. Entertainment Weekly lauds this new development in the working-class Conner family as “enlightened” instead of “mental.”

RAP OVERTAKES ROCK AS KING OF MUSIC INDUSTRY
After a long stretch as the dominant force in American pop that extended several decades after it ceased innovating, rock ‘n’ roll is no longer the biggest-selling genre in the music industry. Instead, the category of Urban Mating Songs known as “R&B/hip-hop” has finally supplanted rock music “in terms of total consumption,” according to an end-of-year report by Nielsen Music.

Only two of 2017’s ten most listened-to artists did not come from the R&B/hip-hop dog pound. Of the 19 songs that had more than 500 million streams in 2017, only two were not R&B/hip-hop. And of the five Grammy nominations for Album of the Year, only one lonely LP didn’t have that slick, ooga-booga, crotch-grabbing beat.

Our main fear about this is that it will bring a wave of painful, pus-oozing, and incurable herpes from the ghetto into the suburbs of America’s heartland.