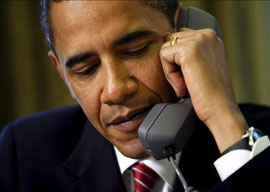 US Senators seemed to shrug, yawn, and wonder what the fuss was all about. Dianne Feinstein (D-CA) bemoaned America’s “culture of leaks” while offering a passive-aggressive “We’re always open to changes, but that doesn’t mean that there will be any.” Saxby Chambliss (R-GA) said “This is nothing particularly new.” Lindsey Graham (R-SC) assured Americans that “We don’t have anything to worry about,” adding, “I’m a Verizon customer. It doesn’t bother me one bit for the NSA to have my phone number.” And Senate Majority Leader Harry Reid (D-NV) awoke from his slumber to say that “Everyone should just calm down.”

On Friday, Barack Obama, whose administration has prosecuted more alleged leakers than all his predecessors combined, claimed that “every member of Congress has been briefed” on the telephone surveillance program, which according to some members of Congress is not true. Obama added, “In the abstract you can complain about Big Brother and how this is a program run amok, but when you actually look at the details, I think we’ve struck the right balance.” Last month Obama delivered a commencement address at Ohio State University that included the following admonition:

Unfortunately you’ve grown up hearing voices that incessantly warn of government as nothing more than some separate, sinister entity that’s at the root of all of our problems. Some of these same voices do their best to gum up the works. They’ll warn that tyranny is always lurking just around the corner. You should reject these voices.

Duly noted, Dear Leader. We hope that your two-day summit with Chinese President Xi Jinping went well and didn’t detract from your efforts to take his nation to task for cyber-spying.

On Sunday the Guardian revealed that the whistleblower was 29-year-old Edward Snowden, a former CIA employee who worked for the NSA through outside contractors. “My sole motive,” Snowden explained, “is to inform the public as to that which is done in their name and that which is done against them.”

The public has now been informed that we’re all merely fleas under a huge federal magnifying glass. Every breath we take, every move we make, they’re watching us. Welcome to the Panopticon, whether you like it or not. It’s not as if you have a choice in the matter, at least not in this “democracy.” More and more it becomes evident that “hate speech” is whatever the government hates and that “terrorism” is whatever scares the powers that be.