The West Is History 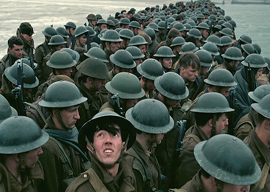 Christopher Nolan’s Dunkirk is killing it at the box office and will likely gross over $200M. It’s a horrible movie that is stressful to watch and never seems to end. The timeline switches back and forth, leaving the viewer scared, confused, and about to vomit. This is why we went to see it. We didn’t want a Romeo-and-Juliet fable about the joys of a conflict that, “Separated the world” (as Churchill once opined). We wanted to capture a glimpse of what it must have been like, and war is hell. You’re not supposed to enjoy it. I saw Saving Private Ryan in 1998 after smoking a joint and the opening D-day scene was so intense, it gave me PTSD. Since then, I nod at vets when I see them on the street because we’re basically peers. Men of fighting age today are mostly spoiled brats. Many of us consider ourselves warriors if we risk being ostracized at work because we’re soldiers online. WWII was such a devastating conflict, however, the dead soldiers from half a century ago are still fighting side by side with the keyboard warriors of today. This film is going to be a massive victory in the culture wars because it shows a generation of ingrates how hard Western man fought on their behalf.

When discussing how the West was won, the narrative is that the white man stole land from the Indians and then used slaves to build it into an empire. This film says something very different and it’s all true. I was sitting next to a bored Puerto Rican chick in the theater who was chewing bubble gum and regularly checking her phone. I wanted to lean over and say, “Do you see the planes? Do you see these boats? Can you comprehend these incredible inventions of man and all the immense good and bad such machines can achieve? Do you see that history wasn’t simply us versus them? It wasn’t white versus nonwhite but a tangled conglomeration of all tribes fighting back and forth to achieve their various ideas of liberty. Do you see how much you owe Western man?” I didn’t bother because, well, you know what would have happened. She would have said, “You don’t know me. Why you want to talk like you know me?”

“This film is going to be a massive victory in the culture wars because it shows a generation of ingrates how hard Western man fought on their behalf.”

Dunkirk starkly portrays the nearly 400,000 British soldiers who were rescued from this coastal French town when the Nazis cornered them on the beaches. It happened in the spring of 1940 and was a major turning point in the war. The Nazis saw it as a victory because they sent England running and the Brits saw it as a victory because they saved hundreds of thousands of men and enabled them to fight another day. In the Time/Life special-edition magazine Dunkirk: One Rescue, Nine Days, 340,000 Lives Saved, they argue that Britain was only able to escape because Hitler blundered and gave the Nazis a three-day break shortly before the evacuation. I don’t think it was a blunder. I believe Hitler allowed the Brits to escape because he saw Churchill as a potential ally at the beginning of the war and hoped they could fight together.

All this is covered beautifully, of course, in Buchanan’s Churchill, Hitler, and the Unnecessary War: How Britain Lost Its Empire. Here we learn of Germany’s affinity with the U.K. (I had no idea the Kaiser was Queen Victoria’s grandson). The book argues that Churchill should have continued England’s “splendid isolation” and let Germany have its way with Europe. The whole thing would have taken a few months and we wouldn’t have had the Holocaust or countless other atrocities. We lost a good 60 million people in that war and most of them starved to death. Worse, Buchanan points out, the war led to the end of Western dominance and begat the proliferation of Leninism, Stalinism, and the oppressive communist ideologies that still plague us today. We may have defeated the Nazis, but using our bravest and brightest left us ill-equipped to handle their ideology. Dinesh D’Souza released The Big Lie: Exposing the Nazi Roots of the American Left this week, in which he makes the claim that the far left are not similar to Nazis—they are Nazis. Where Hillary’s America proved the DNC has no right to use the race card, his new book shows the left has no right to employ the Nazi card, either.

This is what I was hoping my Puerto Rican neighbor and everyone else would glean from the film. We didn’t steal our wealth and privilege from the poor. We had civil war after civil war and eventually figured out the best way to maximize personal freedom. More important, just as Churchill’s hubris enabled communism to flourish after WWII, we are letting the same kind of fascism flourish today. Only, today it’s not just leftist fascism, it’s Islam. The left’s ethnomasochistic war on history has created a vacuum that Sharia is happy to fill. To throw bacon on a mosque is a death sentence in today’s England, but Muslims can rape children with reckless abandon. This happens because of shame. Shame happens because we trivialize our own achievements and assume we don’t deserve what we have. We must have stolen it. We need to be punished.