The Wisdom of a Ukrainian Plumber 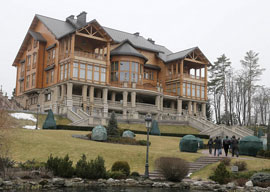 Just before the current troubles in Ukraine began, we called a plumber to our rented flat in Paris, which smelled of mold at the time. He was Ukrainian. He told us why he had left his native country a few years before: Everyone there was corrupt, nothing was possible without bribery, the opposition was as bad as the government, and all political demonstrations, which were frequent even then, were entirely bogus. Indeed, political demonstrations had become a form of social security, the political system’s corrupt and vastly rich oligarchs paying a small daily subvention to the otherwise unemployed who agreed to demonstrate in their favor. There was nothing to choose between the government and opposition except the size of the daily payments that they offered, which varied from day to day like the stock market. Principle didn”t come into it; demonstrators changed from pro-government to pro-opposition and vice versa, according to the amount on offer.

This was only one person’s opinion, but when it comes to understanding a country, one native plumber is worth a thousand foreign correspondents. And things may have changed in the meantime: by the Ukrainian opposition having become honest, for example. Moreover, demonstrators have died, though it must always be remembered that if history proves one thing rather than another, it is that the willingness of people to die for a cause is not in itself a proof of its worthiness. People are as willing to die for evil as for good.

“When it comes to understanding a country, one native plumber is worth a thousand foreign correspondents.”

Having on a few occasions been something of a foreign correspondent myself, I have learned to be skeptical of what I read in such correspondents” reports. The days of Scoop are by no means over, and unanimity is no guarantee of accuracy. The bar at the one luxury hotel in town is often where the history, or rather report of the history, of an undeveloped country’s crisis is made. Correspondents are more interested in what other correspondents are going to write than in what is happening on their temporary doorstep. Lies repeated become truths, and truths ignored cease ever to have existed. One of the things that surprised me was the ease with which an entire press corps could accept the most obvious untruth, usually convenient to some interested party or other, without any external compulsion to do so. I can only suppose that one of modern education’s purposes is to prevent people from thinking for themselves.

So on the whole I am more inclined to believe my Ukrainian plumber, who spoke like a man with no axe to grind and no motive to tell an untruth. Countries change their spots no more than leopards, and Ukraine’s recent history is not encouraging in this regard. Perhaps things are different now, but I rather doubt it. A corrupt dictatorship has fallen: Long live corrupt dictatorship!

Personally I was outraged by pictures of the late president’s personal palaces, upon which he apparently spent so much of his county’s money. I was outraged not so much by their existence as by their appalling taste. Say what you will about Europe’s old aristocracies, of the economic and social injustices upon which their hegemony rested, but no one can gainsay that they left behind them cultural monuments of value sub specie aeternitatis. Even the Victorian industrialists did far better than Yanukovych.