The Worst Sheriff in America 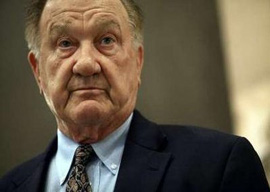 There are many heroes who showed indomitable courage and grace under fire during this weekend’s horrific Tucson massacre. Blowhard Pima County Sheriff Clarence Dupnik was not one of them.

If the White House has any sense, President Obama will stay far away from the demagogic Dupnik and his media entourage when he visits Arizona on Wednesday to memorialize the victims. Indeed, if the White House is truly committed to unifying the country, it will explicitly disavow Dupnik’s vulture-like exploitation of the shooting rampage.

Within hours of the bloody spree, Dupnik mounted more grandstands than a NASCAR tour champion. A vocal opponent of S.B. 1070, the popular state law cracking down on illegal immigration, Dupnik immediately blamed Arizona for becoming a “mecca for prejudice and bigotry.”

To date, there is no public evidence that accused shooter Jared Loughner was in any way motivated by the national rancor over illegal immigration and the Arizona law (though open-borders extremists from the Justice Department on down most certainly wish it were so). When he complained about non-English speakers, Loughner’s nonsensical diatribes were aimed at illiterates in general—not illegal aliens—and “grammar control” by the government.

No matter. Dupnik vehemently singled out “people in the radio business and some people in the TV business” like Rush Limbaugh for creating the New York Times-patented “Climate of Hate.” Sounding more like an MSNBC groupie (which, surprise, he confesses to be) than a responsible law enforcement official, Dupnik baselessly suggested that the shooting was part of a larger conspiracy and railed against “vitriol” from limited-government activists who are stoking “anger against elected officials.”

Dupnik’s mouth has done more to stoke self-inflicted ire against elected government clowns than anything the right could muster against him. Had the hyper-partisan Democrat been more in tune with his job than the media airwaves, the murderous, maniacal gunman might have been stopped.

As Dupnik himself has now admitted, Loughner leveled death threats against others that were investigated by law enforcement—and then apparently shrugged off. Locals note that Loughner’s mother worked for the county and may have had some pull. Pima County College campus police reported five serious confrontations with the mentally unstable young man before he was kicked out of the school, which he decried as an unconstitutional “torture facility.” Classmates said they feared for their lives. His friends say he was a pothead, a 9/11 Truther and a UFO conspiracist so kooky that even flying-objects adherents spurned him.

“The worst sheriff in America is walking in the footsteps of another infamous law enforcement official who put fame, ambition and ideology above public safety: disgraced Montgomery County (Md.) Police Chief Charles Moose, the publicity-hungry Keystone Cop who grossly bungled the Beltway sniper attacks in 2002.”

Despite zero evidence that Rush Limbaugh, cable news, the tea party movement or immigration enforcement activists had anything to do with Loughner’s warped attack, shameless Sheriff Dupnik shows no signs of shutting up.

The worst sheriff in America is walking in the footsteps of another infamous law enforcement official who put fame, ambition and ideology above public safety: disgraced Montgomery County (Md.) Police Chief Charles Moose, the publicity-hungry Keystone Cop who grossly bungled the Beltway sniper attacks in 2002.

Like Dupnik, Moose let politically correct assumptions drive his investigation and incessant press conferences. He insisted on hunting the wrong vehicle while the snipers’ Chevy Caprice (spotted by several witnesses and whose license plates had been checked by police at least 10 times during the shooting spree) got away. The hapless Moose clung to the notion that white militants in a nonexistent white box truck were to blame—leading to a string of unnecessary murders as the real shooters escaped capture for several deadly weeks. No matter. Moose cashed in on his notoriety, inked a fat book deal and beat a hasty retreat to Hawaii.

Dupnik is now following the same ill-gotten path. But decent Americans understand that he and his civilian counterparts have traveled a smear too far. Despite desperate attempts by the progressive left to pin the massacre on the “harsh tone” of its political opponents, a vast majority of Americans reject the cynical campaign to criminalize conservatism, suppress political free speech and capitalize on violent crime for electoral gain.

At the risk of being accused of inciting violence, you might say they’ve done gone and shot themselves in the foot.