The Year the Yankees Lost the Pennant 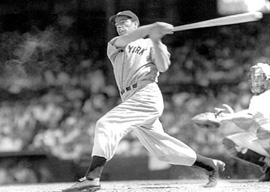 It was 1948, and the great Joe DiMaggio was injured most of the season. Tommy Henrich and Charlie Keller were in the outfield and a young Yogi Berra was behind the plate. But even with pitchers such as Allie Reynolds and Vic Raschi the Bronx Bombers could not catch the Cleveland Indians, led by playing manager-shortstop Lou Boudreau and two future Hall of Famers on the mound: Bob Feller and Bob Lemon.

I write these names without looking them up. They are embedded in my mind as they were back then in any 11-year-old who followed the down-to-the-wire race. I didn”t follow baseball and in fact had never heard of the game until I landed at LaGuardia Airport around September of that year. My father had pulled some strings and I was accepted at Lawrenceville, a leading prep school near Princeton University. Having spoken Greek and German for the first eleven years of my life, my English was nonexistent. One of my father’s executives thought it a good idea to start with baseball, so he took me out to the ball game at Yankee Stadium. Tommy Byrne was pitching against the Washington Senators. By the end of the game I had a pretty good idea of the national pastime.

The Indians went on to beat the Boston Braves (as they were known back then) in the World Series. I remember a jingle even now, “Spahn and Sain and Pray for Rain,” the Braves having two great pitchers in Warren Spahn and Johnny Sain. In the middle of the series I left New York for Lawrenceville. The 280-acre campus left me agog. After eight years of war, occupation, and then a vicious civil war, the only green I”d ever seen was on military uniforms, and not particularly friendly ones. The Greek army wore khaki, the Germans gray, and the Italians green. The communists wore all sorts of things but had a red star on their caps. Lawrenceville’s colors were red and black.

On the very first day I was taken to meet Dr. Healy, the headmaster, a kind man, and Dr. Hyatt, the assistant headmaster, a no-nonsense gentleman who never cracked a smile. I was assigned to Thomas House, in Lower School, and to my amazement was immediately scouted by a Hollywood type. Before any of you suspect I”m on LSD, there was a movie being shot on campus called The Happy Years starring Dean Stockwell as the young rebel and Leo G. Carroll as the headmaster. The film was based on The Lawrenceville Stories, a very popular book some 70 or 80 years ago. I was picked was because I had Gomina on my hair, a gel that young European gentlemen wore at the time”and that men still wear in Argentina”and was wearing plus fours, a sign of refinery in Greece but definitely the sign of a jerk in New Jersey circa 1948.