The Young and the Lazy 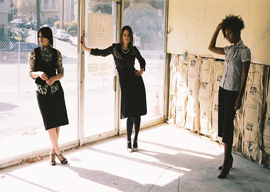 Though the Bible says that rich people getting into heaven is as likely as squeezing a 1500-pound mammal through a tiny hole, it’s worth noting that the vast majority of billionaires made their fortunes from scratch. It’s also worth noting how unbelievably lazy today’s kids can be. I’ve been hiring twenty-somethings for about twenty years now, and though they are getting more tech-savvy, their productivity keeps plummeting. I believe this is due to their snowballing sense of entitlement. Here are ten lessons I’ve learned after watching kids in their early twenties acting hyper-entitled:

1. THEY’D RATHER PROSTITUTE THEMSELVES THAN WORK HARD

I recently had a twenty-three-year old girl email a writing submission for my idiotic site Street Boners and TV Carnage. There was a grammatical mistake in the first sentence, so I stopped reading right there and emailed her that she needs to go back to the drawing board before submitting a post. Her next email said, “I’m showing you two more stories I’ve written, and if you’re still thinking about giving me a chance, read them. I’ve also make a reluctant decision to attach 2 photos of my tits and ass.” Attached were two naked photos. Practice makes perfect, but why bother when you have perfect tits?

2. THEY DON’T WANT TO START AT THE BOTTOM

I had a black female intern at my previous job, and as with all interns, I started her out doing the crap work. She was asked to take out the garbage and organize receipts. I had her stack boxes and even restock the toilet paper. That’s what we did when we started the company. Startups don’t come with a maid or even an accountant. You only get to delegate after you have a reasonable profit, and that usually takes about two years. That was the lesson I was trying to impart.

Unfortunately, she took it all as racism. After she quit, I found a crumpled-up note on her desk that read, “Why are they giving me all these stupid jobs? Certainly 400 years of history has taught them I’m capable of more.” Apparently, if you don’t give an intern CEO responsibilities from day one, you’re a plantation boss.

“They complain about the lack of jobs but every time I give them an easy chore, they spend hours trying to figure it out.”

3. THEY THINK PAYING DUES IS SLAVERY

My friend Syd Butler owns a record label called Frenchkiss Records. He set up an interview with a job candidate who was gay, 23, and had a business degree. He was also in a band and eager to learn more about the music business—perfect. Syd explained what the average day would be like, but when he said, “And if you join me at meetings, you’ll be expected to take notes,” the kid stopped the interview. “Whoa,” he said in that snarky gay way they think is cute, “I ain’t nobody’s bitch.” All Syd could hear was white noise after that. He politely asked the candidate to get out of there.

4. THEY SEE EVERYBODY AS “THE MAN”

I recently co-founded a company that does funny commercials. We’re four pals who hustle all day to keep checks coming in. We’re barely six months old but are doing pretty well because like the Lord, New York helps those who help themselves.

We recently shot a series of sketches to promote the new top-level “.xxx” domain, which will be to the adult world what “.tv” is to the online video world and “.gov” is to the government.  We cobbled together a crew in a few days and began a brutal four-day shoot that would beget 20 separate ads. It was an insane schedule, so during breaks we would try to figure out how to best organize the next shots so we could all get home before midnight. During one of these discussions I overheard a young key grip mumble to his friend, “I don’t give a shit what the next shot is. I’m having lunch. Know what I’m sayin’?” I found out later this same guy had threatened to sue us because we were late on a previous job’s $200 payment—even though our client had yet to pay us.

In this genius’s mind, there is no difference between a startup trying to generate business and a multinational corporation fattening itself on slave labor.

I’ve never seen money as incentive. I like running startups because it’s exhilarating and risky. For every successful venture I’ve undertaken, at least a dozen are sitting in the failure pile. Generating revenue, creating jobs, and simply making stuff is what gets me out of bed in the morning. To hear some putz gripe about the money I’m supposed to be earning for him makes the whole thing feel like a waste of time.

5. THEY DON’T UNDERSTAND THE VALUE OF TAKING RISKS

About twenty years ago I was courting Absolut vodka for print ads. Their marketing division is so coveted, they don’t bother sitting through pitches; they randomly choose artists at whim. An insider told me the best way to get their attention would be to make the ad ourselves and see if they appreciated our gumption enough to throw us a bone.

I spoke to our graphic designer about some ideas, one of which was to cover a bottle in black leather and studs. We’d make the bottle in real life but refine it in Photoshop. “How much does it pay?” he asked. I told him it doesn’t pay anything, but if we get the gig he’d be rewarded a handsome commission. I also explained that a huge client like that would do a lot for our mutual job security. Then he said something that blows my mind to this day: “That’s not ethical.”