The Zombies of Fishtown 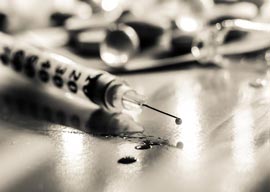 Working-class whites, prole whites, salt-of-the-earth whites who are the soldiers of our army and work in our factories make up Fishtown, a bloc of America that Charles Murray dreamed up in his book Coming Apart: The State of White America, 1960″2010. These are the whites who have seen their socioeconomic indicators decline and their culture erode. These are the whites whose families break up or never form in the age of the pill and no-fault divorce. And now, this is where you find suburban heroin-overdose deaths, too.

The New York Times noticed the spread of heroin to northern New England“that is, prole white New England, far from the Boston Brahmins who anchor the progressive Northeast.

Marion, Ohio, is a city dealing with the heroin epidemic. Marion is Fishtown come to life. The population is under 40,000 and nearly 90% white, right in the heart of an electoral battleground. Manufacturing was its core economic engine, and the city is out of a Springsteen song. But then blue-collar whites saw the power of shame and religion ebb, and somewhere along the way lost their impulse control. Simultaneously, the twin poisons of free trade and open borders destroyed the working class’ economic power. Good-paying union jobs withered away so companies could compete globally, immigration flooded the labor supply, and offshoring removed entire plants.

“Heroin was always there”maybe not in large numbers, but it was waiting for Fishtown.”

The media is catching up with the heroin epidemic, but the drug’s resurgence is over a decade old. Heroin-overdose deaths have quadrupled since 2000, and per a CDC study, opiate-related deaths doubled between just 2010 and 2012 in the 28 states involved in the study. Opiate-overdose deaths have surpassed car-accident deaths in Ohio. Local media stories on traffickers busted and prosecuted in Marion avoid the well-known fact that the buses that come in from Chicago and Detroit are usually carrying heroin dealers. Clermont County, Marion County, and other hot spots are not major metropolises, but suburban counties. Suburban Michigan is seeing the same problem: Muskegon County is averaging a heroin overdose a day.

Afghanistan is the source of much of this heroin. After the start of America’s war there, Afghanistan poppy production“which had been steadily at around 3,000 metric tons per year throughout the “90s”rose sharply. Production doubled and in some years tripled from that “90s plateau, flooding the market as Afghanistan accounted for 90% of the global supply. United States forces did not eradicate poppy fields because with Afghanistan’s nation and economy being a collection of goat-herding tribes, the Afghans needed one cash crop. Both sides in Afghanistan needed the cash to fight, so poppy production went into overdrive. Supplies rise, prices drop. Chasing the dragon became cheaper than buying a bag of M&Ms. The saddest irony of the Afghanistan connection is that in Narcotics Anonymous meetings in small towns in the Midwest, you are bound to hear the story of a returning soldier who switched from Oxys and Percs to heroin just to take the lingering pain away.

Progressives like to shout for open borders, considering the opposition xenophobic. But immigrants just yearning for sweet American freedoms are also politically protected couriers. The illegals you see in small towns are not just trimming lawns, but selling heroin. Mexican gangs are many of the providers in these areas. The Sinaloa cartel has dominated the heroin market in America recently as the main supplier. This is the same Sinaloa cartel that has been working with the U.S. government for years. This cartel has set up shop in our president’s hometown: Chicago is its main distribution hub.