Then They Came for the Atheists 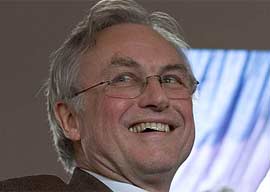 It’s official: Atheists now occupy a lower place than Muslims in the “progressive stack,” meaning that in the Sacred Church of Equality, Muslims are now considered holier than atheists.

If you doubt my assertion, riddle me this: When was the last time you heard a Muslim accused of “infidelophobia”?

Superstar atheist Richard Dawkins recently had an upcoming radio appearance canceled by a listener-funded radio station in Berkeley, CA, a city whose primary purpose these days is to ban things considered sinful to progressives. In justifying their ritualistic shunning of Dawkins, KPFA 94.1 FM in Berkeley cited “hurtful” comments from Dawkins such as the time he called Islam “the greatest force for evil in the world,” because apparently even atheists just can”t help themselves from believing in backwards and superstitious notions such as “evil.”

Because it is clearly evil to refer to Islam as evil, the radio station snatched the moral high ground away from Dawkins, who then defiantly snatched it back from them by insisting that rather than being evil, he was absolutely moral for condemning Islam’s litany of evils:

I have indeed strongly condemned the misogyny, homophobia, and violence of Islamism, of which Muslims”particularly Muslim women”are the prime victims. I make no apologies for denouncing those oppressive cruelties, and I will continue to do so.

That’s tremendously righteous of you, Mr. No God. But the plank in your eye is the fact that you”ve gullibly lied prostrate before pseudo-religious terms such as “misogyny” and “homophobia” and have “strongly condemned” them with all the chest-thumping fervor that religious zealots decry sodomy and faggotry. For all your posturing as a rationalist, your thinking shows a laughable gullibility toward progressive mysticism.

“When was the last time you heard a Muslim accused of “infidelophobia”?”

Dawkins is one of the primary movers “n” shakers in what he calls “militant atheism,” which is a phenomenon where people who deny the existence of God become just as evangelical and annoying as the theists whom they decry as their intellectual and ethical inferiors.

Another top dog in the “new atheist” kennel is Sam Harris, whom now-dead atheist neocon Christopher Hitchens once referred to as a “Jewish warrior against theocracy and bigotry of all stripes.” (Perhaps Hitch never pondered that “bigotry” is just a modern way of saying “sin.”)

Harris calls Islam a “motherlode of bad ideas.” Like Hitchens and Dawkins, Harris doesn”t seem to realize that without no God, there can be no evil: “There are gradations to the evil that is done in the name of God,” he says, stealing the right of religionists to define what is good and evil and claiming it for himself. Because he and his Western liberal allies know what is right and wrong, Harris has claimed that it may be an “ethical necessity” to torture terrorists. He has said that “you just can”t have too many Muslims in your culture if you want it to remain enlightened.” In other words, Muslims exist in darkness, while he has seen the light. Sounds mighty religious to me.

He singles out Islam among world religions for its propensity toward violence, so in his warped moral constellation, the only moral way to fight their immoral violence is to be violent toward them. Like Dawkins, Harris seems to believe that quantifiable “morality” can somehow exist in a universe that emerged stillborn out of a meaningless void.

But as self-righteous as Dawkins and Harris are, the strange piety of neo-atheists may prove to be no match for the earth-swallowing sanctimony of the modern progressive left.

An article in The Guardian suggests that neither Dawkins nor Harris has any moral standing vis-Ã -vis Islam since from birth, their souls were stained with the unforgivable sin of being privileged white males.

While accusing both Dawkins and Harris of committing the mortal sin of “Islamophobia,” Salon compares their anti-Islamist invectives to “the rowdy, uneducated ramblings of backwoods racists rather than appraisals based on intellect, rationality and reason.”

Forget if you will, just for a moment please, that there is nothing remotely intellectual, rational, or reasonable about the term “racist.” It is merely a word used to demonize people”and thus a religious term.

So where does this leave us earthlings as our little green planet spins around in a vast swirling universe of darkness?

As far as taboos and superstitions regarding religion in 2017 in the United States of America go, here’s the current pecking order:

You can criticize Christianity AND Christians”as much as you want. In fact, you are encouraged to do so. You”re almost considered a heretic if you don”t.

You can criticize Judaism but NOT Jews. A lot of Jews are atheists, so it’s OK to criticize their religion but not them. Don”t say a bad word about Jews. I probably don”t have to tell you this, but I”m reminding you anyway. Lay. Off. The. Jews.

You cannot criticize Islam OR Muslims. If you do either, you are a bad person who must be publicly shamed as a sinner.