There Can Be No Living Together 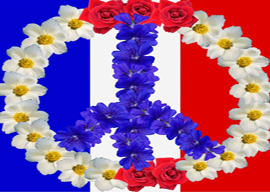 I don”t know about you, but I”m coming down with a nasty case of Riot Fatigue.

The latest example of roaming, drooling morons looting and smashing and burning in the name of some dim notion of “justice” comes from France, which I hear used to be a great country.

The riots began about two weeks ago and at last count had spread to about twenty locations throughout France. Centered in the largely dark-skinned and primarily Islamic banlieues north of Paris, the “protests” and “unrest” have also spilled into central Paris and as far afield as the small town in Normandy where a French priest had his throat slit by jihadists while saying Mass last summer.

The prolonged riots”a four-minute snippet of which is captured on video here“featured the by-now drearily familiar smashing of windows, torching of cars, looting of shops, and blocking of roads. Robbers hijacked and robbed a busload of presumably terrified Korean tourists, prompting the South Korean government to issue a travel warning regarding France. According to French police, 60 percent of the rioters were “children,” which appears to be coded French hate speech for what the press in America slyly refers to as “youths.”

Overwhelmed and apparently having lost the will to fight, police have been filmed running away from armed mobs:

Police have been targeted with Molotov cocktails, filmed being chased with cars, hit with steel poles, shot at, and even targeted using heavy metal balls from the French game Petanque.

Well, now, that doesn”t sound very respectful at all. At least not toward the police. It sounds tres respectful toward the rioters.

Police claim that the baton accidentally slipped into Theo’s rectum while an officer was “applying a truncheon blow horizontally across the buttocks with a truncheon” and Theo’s trousers “slipped down on their own.” On February 9, an “internal””boy, these jokes just write themselves”police investigation ruled that the whole sorry saga was “an accident,” noting “the obviously non-intentional nature of the officer’s gesture.”

Friends and countrymen, I have no emotional investment into whether or not a white French police officer intentionally sodomized Theo Luhaka with a telescopic truncheon. Such things have happened before”after Brooklyn police anally raped Haitian-born Abner Louima with a broom handle in 1997, one cop got a 30-year prison sentence and the anally invaded Haitian took home nearly $6 million in a settlement.

The larger problem here is that there’s a certain “riotous” segment of the population that seems to think that smashing and burning everything within eyesight”and even beating innocent bystanders to death, as happened in the more prolonged and wide-ranging 2005 riots surrounding Paris, AKA the “French Intifida“”is not only justified, it will somehow force a “racist” and “xenophobic” native population to suddenly view these humble migrant populations more kindly…rather than thinking of them as, well, a bunch of savages with horrible body odor who are hell-bent on destroying what was once one of the mightiest nations on Earth.

Like Rodney King before him, Theo pled for calm. And like the LA rioters, the rioters in France ignored his plea and continued tearing the shit out of everything.

France’s socialist President Francois Hollande”who currently enjoys an approval rating “in the single digits“”rushed to Theo’s bedside at the hospital for a quick photo op. He praised the rectal recovery patient for his “lucidity” and “dignity.” Hollande urged the rioters to calm the heck down, adding that “There can be no living together if there is no respect.”