There’s Something About Adolf 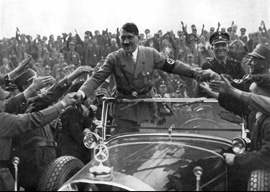 Hitler is all over the news again. These past few months, you can’t throw a rock without it careening off the head of a public figure who put his/her foot in it by saying something about Der Führer—often something surprisingly complimentary, which only increases the Ick Factor for much of the general public.

Some of the more newsworthy examples:

JOHN GALLIANO
For the heterosexual males in the audience, John Galliano is a famous fashion designer. He is currently being tried in France for an incident in which he drunkenly slurred “I love Hitler” to some random bar patrons for no discernible reason and went off on a subsequent tangent of racist and anti-Semitic insults. He appears to have had not one but two separate incidents of the same nature. The diminutive fashionista now faces a €22,500 fine for “public insults based on origin, religious affiliation, race or ethnicity.”

MEGAN FOX
The actress was allegedly fired from her job on the set of the new Transformers movie after Steven Spielberg objected to her comparing director Michael Bay to—you guessed it—Hitler. I hate to make light of such a lapse in taste, but this would appear to suggest that Spielberg is the last person on Earth who hasn’t been notified that comparing bossy and dictatorial people to Hitler has been commonplace for the past, oh, five decades. (Why is it invariably Hitler? Why never, say, Nicolae Ceausescu? What’s Ceausescu—chopped liver?)

“The Cannes International Film Festival defends freedom of expression and is deeply distressed to see that Von Trier has used the festival to express himself freely.”

LARS VON TRIER
Von Trier had already made a name for himself not only as a director of difficult films but also as a wind-up merchant even before this year’s Cannes-troversy. Having previously been accused of fairly routine stuff such as misogyny and anti-Americanism, and perhaps sensing that these first two accusations weren’t nearly inflammatory enough to garner further media interest, he took a stab at praising Hitler during this year’s Cannes Film Festival. After a bizarre, rambling, and seemingly tongue-in-cheek monologue which culminated in the statement, “OK, I’m a Nazi,” he was banned by the festival and declared persona non grata. The festival organizers then issued a press statement that outdoes Von Trier’s original outburst for sheer incoherence:

The Festival de Cannes provides artists from around the world with an exceptional forum to present their works and defend freedom of expression and creation…[and] profoundly regrets that this forum has been used by Lars von Trier to express comments that are unacceptable, intolerable, and contrary to the ideals of humanity and generosity that preside over the very existence of the Festival.

Got that? The Cannes International Film Festival defends freedom of expression and is deeply distressed to see that Von Trier has used the festival to express himself freely. Or as The Clash more succinctly put it:

You have the right to free speech/
As long as you aren’t dumb enough to actually try it.

So is the problem that there’s suddenly an inexplicable resurgence in Nazi chic rearing its swastika-tattooed head in the entertainment industry? Or is it that people who would ordinarily take a rather blasé attitude toward darker verbal provocations suddenly turn very serious when Hitler is the subject?

The answer may be somewhere in between. Don’t assume that I’m trying to defend Hitler, who caused so much devastation and misery. Von Trier’s comments were ill-considered and rather stupid. The only thing that might possibly be said in his half-hearted defense is that the director speaks English with all the ease and comfort of an amputee trying to use a prosthetic limb for the first time, so it’s possible that this was a case of black humor being lost in translation.