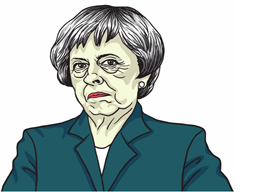 Britain’s international relations have acquired something of Paris in the spring of 1871. Having achieved a lightning defeat at the hands of Prussia, the inhabitants of the French capital ignored the Teutonic army at their gates and descended into bloody civil war. With Brexit at our gates, Britain has likewise descended into civil war; with different elements of the body politic sending out competing negotiating teams. And yet, unlike the French, our opposite number at the negotiating table in fact lost the preceding conflict, namely the EU’s campaign to keep Britain as a member.

But our situation is worse in at least two regards. At least the rebel Paris Commune didn’t send out its own unofficial negotiating teams (as rebel elements of the British body politic have done). Meanwhile it has been forgotten that our opposite number at the table—the E.U.—in fact lost the preceding conflict, namely the campaign to keep Britain as a member. It is a defeat that threatens the bloc’s main trading relationship—it has a significant trade surplus with the U.K.—as well as places its future budgets in fatal doubt. Yet the E.U. appears to be dictating the peace, threatening to veto Britain’s independent bilateral trade arrangements and extracting an indemnity of between €50bn and €100bn before negotiations even start. Britain’s engrained negative self-image means such moves are nonetheless hailed as victories by our media.

Presiding over these non-negotiations is the grayscale figure of Theresa May. Like Hillary Clinton, she desperately wanted to be the first female British premier (and was put into a jealous fury when Margaret Thatcher beat her to it). Like Hillary, she set out her stall on stability and experience—successfully censoring abundant warnings to the contrary. Like Hillary, she overpromotes her own political creations, with many top posts now filled by alumnae of her “Women2Win” organization. Like Hillary, she nurtures bitter personal feuds against those who conflict with her, regardless of their capacity for public service. And, like Hillary, she has led her party to electoral disaster—wiping out the Tories’ first parliamentary majority in over two decades by calling a superfluous election in 2017. Pundits in the U.K. are consigning the Tories to an irrelevance as deep as that of the U.S. Democrats: quite an achievement for a governing party.

“Pundits in the U.K. are consigning the Tories to an irrelevance as deep as that of the U.S. Democrats.”

Yet the main comparison to Clinton—as she is portrayed in the campaign biog Shattered—is that May seemed to want power for its own sake. On the greatest issue of our time—if, why, and how we are leaving the European Union—she has maintained a studious neutrality. When asked how she would vote if a second plebiscite were offered, she refused to answer. Now, such tactical neutrality is nothing new in British politics. Blair and Cameron both occupied the center ground so successfully that they often said as little of substance as possible, for fear of losing voters—rather than as much as possible in order to win them. If pushed, they said whatever the moment demanded, before quietly pursuing their broader agenda.

Yet May’s neutrality is not such a tactical means to a greater end. It rather appears to be part of her political makeup. She presents as a civil servant at heart—a “chief cop,” as one observer puts it in private—dedicated to delivering the wishes of a greater master. In theory, this master is the electorate. But after two decades of negative politics from Blair and Cameron, the electorate has no idea what it wants. Like a caged chimp whose sedatives have worn off, it is lashing out in every conceivable—and contradictory—direction: wanting to leave the E.U. without really knowing why; turning against elites while depending on them for Brexit; even entertaining the knowingly dangerous agenda of hard-left opposition leader Jeremy Corbyn. Against such a backdrop, Theresa May’s vague technocratic centrism is desperately out of date.

The political vacuum has created a vortex that is being compounded in at least four ways. First: The government is plucking random placatory policies from the tornado beating around its head, and invariably making itself appear ridiculous. Reintroducing Britain’s pre-E.U. passport design was supposed to be a Christmas gift to Brexiters. It was a patronizing move that served to reopen Britain’s identity crisis, before tipping into further absurdity when it was revealed they were to be made abroad (yes, abroad!). Second is the inability to confront Jeremy Corbyn’s vision with a liberal-conservative alternative. Instead the party is reduced to aping—and thereby further empowering—elements of his Marxist agenda.

Third is the cost to May’s international profile, coming precisely when the power optics of Brexit demand the Tories draw on their once-brilliant diplomatic heritage. Instead, Theresa May has been forced into a de facto withdrawal of her personal invitation for President Trump to visit the U.K. This awarded a huge victory to opponents like London mayor Sadiq Khan and Corbyn—who had pursued their usual insidious combination of incitement and victim blaming by repeating, ad infinitum, “Don’t blame me if there’s violence!” And yet Emmanuel Macron—presiding over a country with chronic public-order problems, where President Trump is more mistrusted than Putin—pulled of a successful state visit. This stunning indictment of May’s authority meant British voters instead had to look to Piers Morgan for some presidential insight and Anglo-American rapprochement.

Fourth—and most fatally—her inability to lead is creating a Jurassic Park-like environment within government. Political beasts large and small now roam free with little fear of rebuke. Brexit figurehead Boris Johnson—who arguably enjoys greater overseas recognition than May herself—alternates between blundering non-diplomacy and barely disguised stump pitches. Chancellor Philip Hammond—“Spreadsheet Phil”—offers the press contrary briefings in favor of Brexit lite, also without sanction. May’s very own creatures—not least transgender champion Justine Greening—are promoted in great flurries of grandstanding and then resign with equal fanfare. When a headstrong International Development Secretary was recalled for pursuing renegade diplomacy with Israel, the political media broke out the popcorn and tracked her returning plane. Outside the immediate fold of government, canny yet inexperienced backbenchers—notably the self-parodying British gent Jacob Rees-Mogg—burnish their social-media profiles. Yet rather than bringing in new blood—which is both desperately needed and amply present in Tory ranks—repeated cabinet reshuffles vainly shore up the Prime Minister’s waning position. The latest overpromoted loyalist is a fresh-faced Defence Secretary, who has already become a figure of fun.