They Who Smelt It… 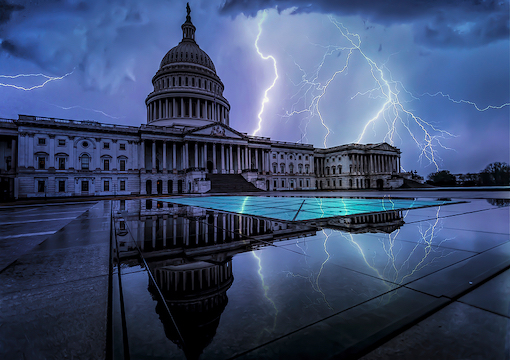 You’d think saving babies would be enough. Dobbs saved the babies. What more does the right need? “We won; pop the bubbly.”

But that’s not how the right’s wired at the moment. Sure, saving babies is great and all, but the MAGA right’s too distracted to appreciate the victory. They’ll never admit it, but MAGAs have let the 1/6 hearing get under their skin. So in the days following Dobbs, when rightists should’ve been doing a victory dance about babies, most high-profile rightists were instead focused on spinning equivalencies about how the left’s reaction to Dobbs proves that the Democrats are “the real insurrectionists.”

Rightists score a major victory regarding something they’ve been bitching about for fifty years, but they can’t enjoy it because of 1/6 defensiveness.

“Yeah, sure, whatever. Look at what AOC just said! Didja see? Didja see? They’re the insurrectionists, not us!”

“Fuck ’em. Look at Maxine Waters! That’s what an insurrectionist looks like! They called 1/6 an insurrection, but they’re worse! But they won’t get investigated. Unfair, huh? That settles it; I’m vindicated.”

When AOC stood outside SCOTUS and told her followers to go “into the streets,” everyone from MTG and Boebert to Mollie Hemingway, Sara Carter, Stephen Miller, Dan Bongino, Benny Johnson, and 1/6 subpoena recipient Alex Bruesewitz screamed, “Aha! She’s the real real insurrectionist! 1/6 is exonerated!”

(Even though telling activists to “take to the streets” to protest has been a standard leftist cliché since before most of us were born.)

When the DOJ promised to “protect reproductive freedom,” Matt Walsh wailed, “This is an insurrection far more dangerous than anything that happened on January 6.”

(Even though disagreeing with judicial rulings and promising to find workarounds is par for the partisan course and something Trump should’ve done occasionally.)

When Rep. Jackie Speier told followers to “armor up” because “there’s a war out there,” Ezra Levant screamed “insurrection!” And when a handful of Antifa types marched in Downtown L.A., Fox’s Dan Gainor tweeted “Hey #J6Committee want to see insurrection?”

(Even though that Downtown shindig was dispersed before 11 p.m., and by L.A. standards, it didn’t even match, in terms of numbers or destructiveness, the Depeche Mode record store riot of 1990.)

Rightist rising star Rogan O’Handley predicted that Friday night, Democrat cities would be burned to the ground by pro-abortion mobs. Bad call; no cities were burned. And here in L.A., the LAPD’s refreshingly brutal handling of freeway-blocking protesters Saturday afternoon suggests that rightists banking on abortion mobs alienating voters by sacking cities will be greatly disappointed (abortion protesters are predominantly white; they don’t have racial immunity from rough treatment by cops).

Tucker Carlson (of course) devoted his entire Friday opening segment to how AOC and Biden are the real insurrectionists for protesting Dobbs (Tuck also waxed conspiratorial about why Roe supporters were so “ready to protest” with “ready-made signs,” as if Dobbs hadn’t been leaked nearly two months ago).

So the talking point for the summer is, “Abortion protesters are the real insurrectionists.”

And my question is, who’s that talking point aimed at? Who’s it for?

Almost half of independent voters say they’d be less likely to vote for a candidate who spouts Trump’s election-theft claims (only 11 percent say they’d be more likely). Sixty-eight percent of independents consider the work of the 1/6 committee important (47 percent “very important,” 21 percent “somewhat important”). 1/6 is not a winning issue for the right among swing voters. And yet Friday, when SCOTUS gave the left a reason to push 1/6 to the back burner, rightists decided to respond by reminding everyone of 1/6.

Dobbs was a gift to the right by taking the focus off 1/6, and rightists responded by putting the focus back on 1/6. It’s like rightists farted at the dinner table, leftists laughed at them, and just when everybody has reason to forget about the fart, rightists hear a leftist hiccup and scream, “Aha, see? They make rude noises too! They’re the gaseous ones, not us!”

Which of course only reminds everyone about the initial fart.

1/6 was a stinker, and you should feel humiliated by it. You farted, they laughed. But, eventually the room will tire of the jokes. Don’t make it worse by constantly defending the fart or nervously accusing others of farting just to repair your bruised ego.

Let 1/6 go. Let the excuses go. No, it wasn’t an FBI op. No, it wasn’t “the same as BLM.” No, it isn’t “unfair” for 1/6 to draw scrutiny that BLM riots don’t. America’s had race riots for 200 years; there’s no novelty to them. Blacks riot; it’s what they do. No need for an investigating commission. It’s like, conservatives can bellyache after each high-profile mass shooting, “Why all the outrage over these kinds of shootings but nobody cares about black kids killing each other on the streets of Chicago?” but just because we pretend to not know the answer doesn’t mean we don’t. Blacks shooting blacks is the world working as expected, as is blacks throwing tantrums and looting.

1/6 was most definitely not the world (of politics) working as expected. It was unique and jarring. Don’t be a child and weep, “Waah, people are paying too much attention to the attention-grabbing thing we did.”

Disgruntled supporters of a defeated president beating cops and smashing their way into the Capitol with some impractical unformed notion of overturning an election was novel, and the mere possibility that Trump considered martial law and fake electors, or that he encouraged or tolerated threats to the VP, deserves investigation. Extraordinary events provoke extraordinary responses. That’s reality, whether you like it or not.

If you want the memory of 1/6 to fade, you’ve got to move on. That means not using every opportunity to make strained, defensive equivalencies. But since I know many of you are going to stick with the “Democrats are the real insurrectionists” talking point anyway, again I’ll ask—who’s it for? 1/6 was carried out by the “screw your optics, I’m going in” crowd. 1/6 equivalence comes courtesy of those humiliated by the former’s failure and how it’s been used as a cudgel by the left. Like 1/6 itself, 1/6 equivalence is not aimed at those outside the group. “Screw your optics” by definition means “I don’t care how this looks to others.” The 1/6ers didn’t care (they were neck-deep in their own cultish mania), and 1/6 apologists don’t either. The blathering about “See, they do it too!” might appear orchestrated to convince bystanders, but it’s 100 percent about the humiliated trying to convince themselves.

It’s balm to soothe the base’s sore ass. And in fact there’s a heated debate going on right now among political pollsters regarding whether soothing the base is all that’s needed in an election year.

Far-far-far leftist pollster Rachel Bitecofer has riled the pollster community by claiming that the very notion of the “swing voter” is a myth. Yes, “optics” don’t matter, because it’s the already ideologically hardened who decide elections. Base turnout is all that counts, and base turnout is dependent upon base energization. So energize the base by any means necessary, to hell with how “unaffiliateds” react.

Countering Bitecofer are pollsters who stand by the importance of the swing voter and the necessity of targeting the persuadable. These pollsters point to studies that show 75 percent of “election to election swing” is due to “swing voters changing their minds,” while only 25 percent is due to “base turnout.”

I’m not gonna litigate that matter here (it’s not my field), but one look at Bitecofer’s Twitter makes it clear that she’s the leftist version of a “screw your optics” MAGA. Everything’s “smash smash kill kill.” Trump’s a “Nazi,” DeSantis a “murderer.” Bitecofer’s “myth of swing voters” thesis exists to rationalize her own preference for over-the-top name-calling and her simpleminded, black-and-white worldview. If the swing voter is irrelevant, if the middle-grounder doesn’t exist, then Bitecofer’s extremist ideological self-indulgence becomes conveniently smart as well as emotionally satisfying.

Same for MAGAs. If the swing voter is irrelevant, if all that matters is firing up the base, then indeed, optics be screwed. Base-energizing lies become beneficial: Abortion advocates are fomenting insurrection! 1/6 was an FBI plot! No cops were assaulted; the MAGAs entered the Capitol peacefully! Eliminating the abortion rape exception isn’t political suicide!

Convince yourself that every election is just the base and not the swing and, left or right, you can guiltlessly indulge your every ideological excess and pleasing untruth.

Bitecofer and MAGA are symbiotic, mirror-image twins. Over-the-top vitriol, comforting lies, simplemindedness, and a pathological contempt for anyone who says, “But wait, how might Joe Swingvote react to this?”

If Bitecofer’s on target, all of that is justified. Every grotesque, off-putting thing about American politics is justified.

Of course, if she’s wrong, then the midterms will go to the side that appeals to swing voters.

Problem is, Dobbs has energized the Dem base to an insane degree. Dobbs has turned leftists from defenders of a failed regime to insurgents, and insurgents are always more energized. If Bitecofer’s thesis is accurate, Dems have the advantage now. Abortion’s set the Dem base afire, while GOPs are already starting to sour on some of their own candidates (and count on Trump to dampen base enthusiasm for primary winners he didn’t endorse).

Rightists should proceed as though Bitecofer’s wrong, because, as they won’t be able to match the left in terms of base energization post-Dobbs, they have little choice but to acknowledge and engage the swingers.

So lose the self-indulgence and false equivalencies.

Doing so may not be the emotionally satisfying move, but it’s the smart one.