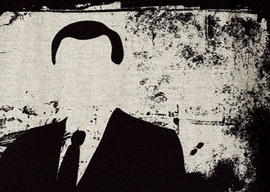 They bring tens of millions of 7th-century Muslim immigrants to 21st-century Europe and then clamp down on Europe for resisting the unnatural graft.

They funnel 200 different peoples onto the same already-crowded patches of Europeans’ (or ex-Europeans’) land insisting that we are all the same and then invent multiculturalism and voting in 25 languages.

They import grasping poverty from the Third World and then are perplexed when the poverty grabs what it can purloin from its hosts’ public treasury.

They pillory Enoch Powell in 1968, only to wake up to smoldering England and bands of “youths” beating, stabbing, and robbing Britons in 2011.

They see who the “youths” are and then write headlines such as, “Is technology to blame for the London riots?”

They force women on the Army and Navy and then panic that there is a “rape epidemic” in the Army and 19% of the female sailors are pregnant.

They encourage sodomy and are mystified when a Sodom-like medical plague breaks out.

They force the sodomites on the Marines and then court-martial the Marines who don’t approve of forced sodomizing.

They recruit five-foot grandmothers for sheriff’s deputies to escort violent felons twice their size and half their age and then pass bills honoring the grandmas after they were squashed by said felons. To secure the homeland, they ignore the known knowns and harass the unknown unknowns.

They let through swathed Allahu Akbar followers but corral white Christians to shuffle through naked scans shoeless, beltless, and presumed-innocentless.

They plea-bargain and parole millions of violent felons and then blame crime on guns.

They sell guns to violent criminals in Mexico who use them to shoot Americans, then blame crime on guns in American citizens’ hands.

They build China’s military from scratch with American dollars and American technology and then notice in bewilderment that China’s military has become a towering menace. If American, they arm, train, and sponsor tribal jihadis all over the Muslim world and then are dumbstruck when the jihadis turn all that on their infidel benefactors. If European, they genuflect before and pay jizya to aggressive Muslims, then blame “right-wing extremists” when aggressive Muslims slap them in the face.

They fight al-Qaeda in Afghanistan, support it in Egypt and Libya, and import it to every Western country. If Jewish, they live like WASPs, vote like blacks, and lobby like La Raza—and then complain that many don’t like them. If Christian, they vote socialist and then discover the unknowable secret that socialists hate Christians.

They bind Northern Europe’s productive countries in the same currency with the sunny South’s freeloaders and then are stunned when the euro is in danger of collapsing.