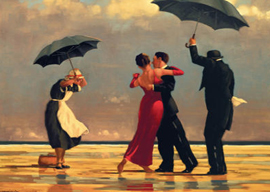 The Occupy movement brags that the parks it seized once hosted Depression-era shantytowns. But on the eve of WWII, America heard little talk of class warfare.

Back then the nation’s social fabric remained intact because the 1% employed 2% of the 99% as domestic servants. Back then the 1% pulled their weight.

Today over eight million American households are worth a million dollars or more. I propose that if a fifth of US homes once again had full-time servants, unemployment would be a thing of the past. Tens of millions of new jobs could be created because population growth and the 40-hour week have compounded the number of servants needed to approach—let alone restore—the sort of 24/7 service our grandparents enjoyed.

The collapse of this once-fruitful job sector is largely bureaucracy’s fault. OSHA regulators have made employing live-in help as onerous as running a zoo for endangered species. Politicians who hire under-documented au pairs have put the nouveaux riches in such a funk that encouragement is needed to restore America’s original service industry to its former glory.

“I propose that if a fifth of US homes once again had full-time servants, unemployment would be a thing of the past.”

Let’s start by making servants tax-deductible. No self-respecting nanny state should tax nannies in the first place, and if tax returns countersigned by maids, butlers, and valets earned their masters instant rebates on April 15th, Congress would soon make cooks, chauffeurs, and footmen deductible as well. Communitarian protests at the horrid injustice of it all would fall flat if draconian tax surcharges fell on poltroons who sustain unemployment by mowing their own lawns. Imagine if Occupy members with trust funds were compelled to employ footmen to do their protesting for them.

Once America’s millions of patriotic millionaires realize the housing market is theirs to reflate, they will begin restoring long-idle carriage houses to their intended purpose of housing the revitalized carriage trade’s coachmen. America might even kick its century-old automobile addiction if enough English Literature and Economics MAs can be taught to shoe horses.

Making servants’ wages deductible like mortgage payments would also help service industries to prosper. Sewing machines should whirr as sweatshops vie to create livery both for newly employed servants and those who serve them in turn. Immigration laws will likewise gain new rigor as pols such as Romney and Pelosi, once castigated for under-documented servants, rush to order their IRS-registered kennel men. Even obsolescent TV pundits can be put to work replacing unsightly handicapped ramps with porte-cochères or lecturing Irish maids on the workings of democracy.

Greens should rush to join this reactionary revolution because it promises more than fast freeway lanes for chauffeur-driven electric cars. Besides a return to the delights of home-canned fruit and truly slow cooking, expanded domestic service will enable landowners to strike a blow against OPEC by distilling their own gasohol from corn or cane. When moonshine and rum rations worthy of the British Navy trickle down to junior servants, domestic tranquility will be assured as property owners set their groggy minions to work felling trees to feed their McFireplaces. Where there’s heat, there’s light! Decentralized heating will in turn provide work for youthful chimney sweeps. Superannuated jockeys and basketball players will be removed from welfare rolls, restoring them to gainful employment as lantern-bearers and statuesque torchieres.

Instead of receiving food stamps, millions of semi-illiterates will gain self-respect through the miracle of deductible servitude. The republic will return to a measure of douceur de vivre while reminding the world that America’s native ingenuity is not limited to silicon chips.

Any nation able to turn failed Hollywood writers into Tweeters-for-the-stars ought to be able to create additional pedestrian jobs. With the upper middle classes hiring people to handle their Web-surfing, it may fall on Hamptonites and Malibu residents to employ the rest. If only the government would help them hit the beaches as fast as their sedan chairs can carry them.