They Say They Want a Revolution 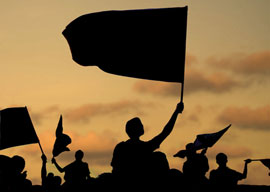 According to Fairleigh Dickinson University’s PublicMind survey, 29% of US citizens polled say they believe that “In the next few years, an armed revolution might be necessary in order to protect our liberties.” Of the five potential responses to this question”“agree, disagree, neither, unsure, no answer””only 47% of those polled (31% of Republicans) overtly disagree with the statement.

Our ruling caste rivals the ancient Roman emperors for personal decadence and corruption. An official from the FBI says corruption is America’s leading problem. Americans have little faith in important national institutions: Congress, the healthcare system, the financial system, the schools, the criminal-justice system, big business, and the media. Other than the military, and to a lesser extent the police, all major national institutions are widely loathed.

“Which Americans are going to lead an armed revolt against the present regime?”

The government and various unaccountable NGOs are actively subverting the borders while citizens wallow in 14% U6 unemployment rates. Our economic elites tell us that immigrants are necessary for economic growth, but for 90% of the population, economic growth has remained stagnant or gone backwards since 1970. The egregious lies and omissions of our mass-media politburo are so bad, Larry King has gone to work for Pravda. The IRS harasses conservative political groups with impunity. The government spies on its citizens. The government drives tanks and flies military helicopters around our major cities in response to the towering threat of two Crock-Pot-wielding foreigners who were settled here and subsidized by the government in the first place.

On the family front, overzealous CPS workers and police in California recently took a five-month-old infant away from his parents for seeking a second opinion over a life-threatening surgery. California CPS workers didn’t mind when a lesbian couple began giving their 8-year-old boy a sex change. Thanks to our financial elites, manufacturing output has fallen into a bottomless abyss, except for ammunition makers, who can’t make enough to feed both the government and nervous citizens.

The situation appears grim, but the question presents itself: Which Americans are going to lead an armed revolt against the present regime? There are none. While people may be unhappy at the state of things, there is no political vanguard with ideas or organizational skills. Demographics are also not friendly to the potential revolution. Revolutions are largely fought by young men. While there are occasional signs of independent-minded youth, the exceptional among them are either rotting in jail, working on their startup ideas, or going expat. The average among them are drugged, cowed, atomized from their communities, and presently useless to themselves and others.