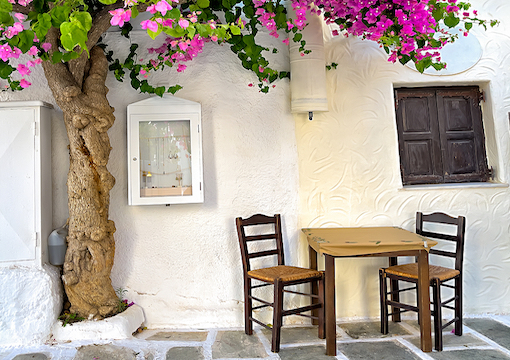 An F. Scott Fitzgerald biographer by the name of David Brown refers to America’s promotion of deviancy (my words) as “the great post Appomattox launch toward materialism.” I liked that line and was thinking about it as I left the boat early morning and walked into an almost perfect Greek village square for a coffee. There were some French people blabbering away with their usual hand gestures, Greeks discussing politics in high volume, and then an American couple, both quite attractive, each with a Mac in front of them and absolutely impervious to anyone or anything in their immediate surroundings. Talk about a launch toward materialism. These two never once looked up from their screens, remained totally glued and expressionless to that demon plastic or whatever screens are made of, and failed to look up even when a Greek woman got into a shouting match with an Austrian lady who had taken her chair. In the meantime they had occupied a table in the café that would have changed hands about three times if it weren’t for those two extremely annoying Americans. The owner of the café shrugged his shoulders when I told him to ask them to vacate the premises.

“I just stared at the Americans, wondering what had taken place to turn people like those two into soulless automatons.”

Now, I know it’s none of my business, but this was hardly a launch toward materialism; it looked more like a storm, a typhoon of blind greed. Mind you, could they have been writing the great American novel? I doubt it and am willing to bet the boat I’m on that it was all about moola and nothing more. It was, to say the least, dehumanizing. Two tables away from them were three old Greek men, with their white mustaches and their caps, sort of leaning on their walking sticks. They each spoke in turn, with silences in between. Small children ran among the tables, women in black passed by without a glance, the French and Italians continued their singsong ways. I just stared at the Americans, wondering what had taken place to turn people like those two into soulless automatons. Was it arrogance, self-importance, or lack of understanding of our European culture? And then I thought of Yomi du Roi’s sister.

Yomi was my wife’s childhood and best friend until her recent death. She came from an extremely old and good family and was also very rich. Her sister, Princess de Merode, had the bad luck to be targeted by some hoods and have her Paris flat raided. She was tied up and asked where the jewels were. They addressed her in the informal “tu.” Her answer was short and to the point: “D’abord c’est ‘vous,’ ensuite c’est ‘madame.’” (“To begin with you address me in the plural. After that it is ‘madame.’”) And the bad guys followed her instructions, addressed her in the formal “vous,” and left with all the loot after untying her. Now, that’s what I call sticking with protocol despite the inconvenience.

What does this have to do with that provocative display of ethnicity by two Americans clicking away at their damned machines in the middle of a beautiful square, oblivious to everything but the mouse? Nothing, I guess, because the past means nothing to them, whereas the Parisian hoods robbed but respected the authority conveyed by the princess.

And now to matters nautical. If God granted me one wish it would be the ban of the world’s most useless item, the Jet Ski. People with a lower IQ than their age master the device on the first try. All it does is pollute and annoy with its noise, and it also kills swimmers and fish alike. Horrible superyachts carry them, and even more horrible people use them nonstop. No bay is safe from these pests and the morons who use them. Please, God, grant me my wish before I shoot one of these pests and end up in the pokey.

Sailing from the edge of Christendom that is Patmos and heading west, we hit very high winds and extremely rough seas. My son, a great sailor, and the crew put up a storm jib and the mainsail, and battled angry waves all day. I watched the sea crashing on the bow, like something only Poseidon would allow. Thinking back, I haven’t sailed through such a storm since crossing the Strait of Messina in 1971 on my first Bushido. That was 51 years ago, and we had a knockdown and a sailor went through the skylight and a Soviet troop ship going by whistled at the blonde who was panicking on board. This time around it was all family and everything was hunky-dory and I had to drink a bottle of white and half a bottle of vodka to finally get a buzz. A wife, a granddaughter, and a son on board do not for a dramatic cruise make. We finally made it past the center of the storm and on to Skinousa, a charming isle inhabited by around 200 people, one taxi, a few wonderful tavernas, and a very pretty Albanian waitress posing as a Greek that my Romeo son immediately went after. There were a few horrors anchored in the bay, triple-decked refrigerator-looking superyachts, probably heading for Mykonos and taking refuge. I left early and headed for Paros, Kea, and then Koronis. We’ve survived winds that would rip the horns off a cuckold (a French expression), and we’re in a very good mood because Romeo failed with Juliet hence he’ll stick to crewing.