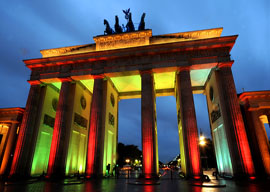 Throughout the summer, former director of the German Bundesbank and a longtime adherent of the German Social Democrats, Thilo Sarrazin, remained in the crosshairs of the German political class for his controversial work dealing with the relation between high crime and Germany immigration policy. Only by the peculiar standards of Germany’s national parties, courts, and educators, could Sarrazin’s work, Deutschland schafft sich ab, be considered even edgy. Sarrazin was long in a party that spends much of its moral energy apologizing for the entire German past and trying to obliterate German national identity through Third World immigration. He represented the Social Democrats in Berlin’s very leftist municipal government and achieved his position at the Bundesbank because of his party connections.

Sarrazin’s book, which climbed to the top of the German bestseller list, is, moreover, far from a blanket condemnation of immigration. The author argues that having uneducated and crime-prone Muslims settle in Germany has been bad for the country. The costs have far outweighed the benefits in terms of violent crime, urban disruption and financial costs. If Germans need more foreign workers (which given its 11% unemployment rate and continuing brain drain, they plainly do not), it might be best to import Jews from Eastern Europe.

Sarrazin laments the Nazi treatment of the Jews, whom he presents as a cognitively gifted and productive people. He calls for replenishing Germany’s Jewish population, and thereby ensuring a mental enrichment of German society. It might be objected that this policy would result in taking jobs away from vulnerable Germans. And unless the German system of having employers pay for many of the workers” benefits can be rescinded, it would do no good bringing more immigrants to Germany, even if they test well on IQ tests.

There may soon be no more Germans, as opposed to Third World people inhabiting Central Europe, and sterile robots speaking broken English and apologizing for their real or imaginary ancestors.

Despite this gushing Philosemitism, the vehemently anti-German but Jewish nationalist Central Committee for Jews in Germany, and its predictably hysterical chairman Stefan Kramer, denounced Sarrazin as a threat to German democracy. Kramer insisted that Sarrazin be stripped of all his public honors and that action be taken against him for venting pernicious opinions, which reminded Kramer of (what else?) the Third Reich. Obviously Hitler too had planned to fill Germany with Ostjuden and to lavish on them, once they arrived, high-paying jobs. Significantly, two until recently very leftist Jewish German journalists, Ralph Giordano and Henryk Broder, thundered against the Central Committee for its scare tactics. Both praised Sarrazin’s book for alerting Germans to the perils of Muslim immigration and for saying very nice things about Jews.

But despite this praise from unexpected quarters, the Social Democratic Party Committee expelled Sarrazin and on September 3, he was forced to resign from the directorship of the Bundesbank. With equal fury, the faux conservative Christian Democratic Union also weighed in against the beleaguered author. The chancellor Merkel attacked his “insane, absurd opinions,” while the Christian Democratic German president Christian Wulff has not only decried Sarrazin as an unhinged bigot but in a speech last week before German journalists, called for tighter laws against “expressing views out of context.” This was a threatening reference to Sarrazin by a supposed German jurist of high standing as well as the current German president.

In contrast to the German political class, which is confined to a narrow spectrum located between the Village Voice and sheer lunacy, most Germans appear to agree with Sarrazin that “Germany Is Abolishing Itself.” According to polls, Germans are not only running out to buy his book but a majority of them applaud Sarrazin’s candor. Other poll results, some of which have been played up in the patriotic tabloid Bildzeitung, suggest that Germans are chaffing under the enforcement of Political Correctness. The majority demand the freedom to present unconventional and even pro-German national views, without having to worry about being dragged into court as “enemies of democracy.”

This, by the way, is a criminal charge that can be brought against individuals and groups under Germany’s whacky constitution, and the thought restrictions are almost always applied against conservative Christians and insufficiently antifascist journalists and educators. The danger to German democracy charge has also been used with remarkable success by the Christian Democratic Union, against right-of-center parties that are cutting into its vote totals. Since the judges in courts created specifically to “defend Germany’s liberal democracy” are political appointees, the scare tactics employed have worked to preserve the party oligarchy.

This judicial harassment takes place almost exclusively against the Right. Such leftist parties as the Greens and the Party of Democratic Socialists, which happily recruit former Stasi spies and put them into leadership posts and which often resorts to violent means in order to keep “fascist” opinions from being publicly aired, have generally enjoyed immunity from judicial investigations. Presumably only those who complain about the high crime rate among Muslim immigrants or who dare to write politically unacceptable scholarship constitute an antidemocratic threat. Parties of the Left are free to organize riots in Dresden, Berlin, and other German cities, while the authorities look on indulgently.