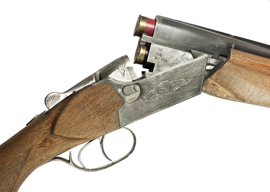 Or if they don’t, we can take them apart.

Damn these pins! Pins are a huge enemy.

Excuse me: I am working my way through a DVD put out by the American Gunsmithing Institute. My instructor here is Robert Dunlap.

His name was unknown to me until I recently went skeet shooting with a friend who knows more about guns than I ever shall. I was wielding the Derb family shotgun: a Mossberg 500 pump-action job that I bought secondhand a couple of years ago for $240. The Mossberg 500 is a sort of Model T Ford of pump-action shotguns: the basic item without frills.

At our next meeting my friend handed me a DVD on which Mr. Dunlap gives a brief history of the gun, then takes it to pieces, cleans all the pieces, and reassembles the gun.

“In this universe, time’s arrow only ever points one way, and taking things apart is much easier than putting them back together.”

(It almost seems disrespectful to say “Mr. Dunlap.” The level of expertise here is so high, it calls for some honorific title. There are apparently no doctorates or professorships in gunsmithing. The English language needs a word like the Chinese shifu. Wang Xiansheng is just Mr. Wang, but Wang Shifu is an expert in something or other, most likely something practical. We once had an equivalent: Four hundred years ago my instructor would have been Master Dunlap. Nowadays, if you didn’t spend your twenties in book learning, you’re just Mister. Bah!)

So here I am working through that DVD, with the family shotgun currently in 56 pieces: two wood, 51 metal, three other”on my workbench in the basement.

I learned this to maximum mortification with a gun around age six. A loving uncle had come visiting from a distant town, and it was my birthday. As a present, he gave me a handsome toy gun with a mechanism that fired percussion caps for a satisfying gun sound.

While Uncle Fred socialized with my parents in the living room, I hid out behind the sofa and took that gun to pieces. Having done so, I had no idea how to reassemble it. There was an unpleasant fuss. Perhaps it was my childish imagination, but I never afterward felt that Uncle Fred was quite so loving.

Ten years later in my school’s army cadet corps, I learned how to strip a Bren. The Bren gun was the mid-20th-century British Army’s standard light machine gun. Stripping it down to its component pieces”it had about eight, as I remember”was a standard exercise in Basic Training. There were speed competitions”anything under fifteen seconds was a good time. There were aces who could do it blindfolded. There was a whole cult of Bren-stripping. In some corner of what was once the British Empire”upcountry Burma, perhaps, or some Caribbean island off the tourist track”they are probably still stripping Brens for amusement.