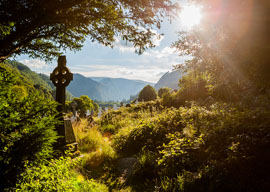 Due to the vagaries of the lunar calendar, the 100th anniversary of the Easter Rising in Dublin is either just past us or coming up in late April.

In either case, today is a convenient occasion for trying to put Irish history into some sort of long-term perspective. The 1916 attempted nationalist putsch (while the British were otherwise occupied on the Western Front) eventually led to the 26 southern counties of Ireland finally achieving independence after about 750 years of getting shoved around by England.

To talk about Ireland inevitably leads to the domineering subject of England. It’s admittedly unfair to Ireland, but understanding Irish history requires grasping something of what made England uniquely influential in molding the modern world. As English philosopher John Stuart Mill observed in 1866:

Being Ireland next door to dynamic England was a little bit like being Steve Jobs” adopted little sister, Patty Jobs. It’s well-known that the Apple founder didn”t meet his biological sister, the gifted novelist Mona Simpson, until they were adults. The two talented achievers then got along splendidly.

What’s less often noticed is that the adoptive siblings, Steve and Patty Jobs, did not get along as adults. Patty didn”t much air her grievances in public, but it’s not hard to imagine what sibling rivalry was like for a normal girl growing up down the hall from the world’s greatest salesman.

For example, when Steve was in the middle of seventh grade, through force of personality he made his parents suddenly move to a more upscale school district. Whether little Patty wanted to leave her school friends behind doesn”t come up in the biographies. What mattered was that Steve convinced their parents that moving would be best for Steve. And, as usual, Steve got what Steve wanted.

England was the Steve Jobs of nation-states, innovative and piratical, while Ireland was a Patty Jobs kind of place.

“Why did England hold the whip hand over Ireland rather than vice versa?”

Ireland served as England’s safety valve, allowing the English to enjoy a remarkably settled distribution of property over so many centuries, along with the political comity that comes with a lack of controversy over who owns what.

As we see in the Holy Land today, nothing causes more long-term resentment than expropriating real estate. As Machiavelli advised in The Prince, “Men more quickly forget the death of their father than the loss of their patrimony.”

When politicians fought civil wars in Britain, the winners largely left the property of the English public sacrosanct, which contributed to the famously mild tenor of domestic English politics. Instead, the winning armies in both 17th-century civil conflicts were paid off by being sent over to Ireland to put down Irish rebels and then help themselves to their lands.

The existence of Ireland as England’s receptacle for its darker impulses thus did wonders for the rule of law within England. But it’s hardly surprising that many Irish grew tired of this relationship.

Why did England hold the whip hand over Ireland rather than vice versa?

One reason was sheer size: England (which comprises most of the more desirable lowlands of the island of Great Britain) is a little over 50 percent larger than the entire Emerald Isle.

Ireland’s population peaked in the United Kingdom’s 1841 census just before the potato famine at 8.2 million, compared with 13.7 million in England. The population of the island, north and south, has yet to recover from the 1840s, being just 6.4 million today.

Moreover, the English practiced later marriage than the Irish and thus tended to be wealthier per capita and further from their Malthusian ceiling. The Irish laborer’s typical diet in 1841 was milk and 10 to 20 pounds of boiled potatoes per day.

Another reason for the poverty of the Irish relative to the English was that while English lords were pioneering scientific agriculture from the early 1700s onward, Ireland tended to be plagued by absentee landlords who extracted rents from Ireland to be spent in more-fashionable England, leaving the management of Irish farms in the unenlightened hands of hired overseers.

But England possessed political as well as geographical and cultural advantages over Ireland: in particular, nationalism.

It’s not a priori obvious what scale is best for humans to organize themselves politically. The ancient world, for example, experimented with both compact city-states and vast empires. Today the idea of globalism is in fashion, although no one offers any plausible plan for accountable rule on the world scale, which implies that its proponents are, in practice, simply new age buccaneers profiting from lawlessness.

The modern world, however, is organized on the now old-fashioned idea of nationalism pioneered by England over the past eleven centuries. Nationalism has actually worked fairly well, especially as interstate war has declined.