This Drag Show Is Literally Retarded 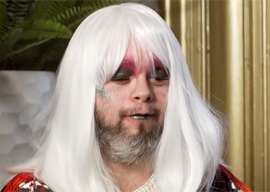 If you get any kind of pleasure from watching bearded, wig-wearing Mongolian Idiots in leather jumpsuits with their faces caked in makeup twerking their flabby asses to the delight of bar crowds who are not mentally impaired but may have significant emotional problems, far be it from me to deny you that pleasure.

But on Saturday night as I watched the livestream from Grand Rapids, MI of the UK-based, all-Down syndrome group of transvestites known as Drag Syndrome strutting their low-status flesh around onstage, my guts violently tugged with the feeling that these poor souls were being exploited.

Drag Syndrome is self-described as—hold on a second, I doubt they have the verbal agility to make such descriptions, so I’ll pin this ad copy on their handlers—a “Drag collective featuring highly addictive queens & kings with Down-Syndrome.” They consist of three white males who go by the stage names of “Horrora Shebang” (“a very super major Bitch in many hoods around the world”), “Frozita Honkong” (“very kind but can bite hard if one shouts too loud in her presence”), and “Gaia Callas” (“a prolific artist, performer, filmmaker and a painter”), along with a white female who wears beard makeup and has been dubbed “Justin Bond” (“King Justin Bond if you’re NASTY! Justin Bond is multi-talented, handsome King. He can sing, he can dance, he can love you till the end of time.”) The troupe also harbors three black males who don’t get nearly as much love and attention in the group’s promotional materials, and I feel it incumbent upon myself to call out the group’s managers for such blatant colonialism, privilege, whitesmanship, and flat-out race-baiting.

Daniel Vais is the group’s choreographer. As far as I can discern, his chromosomes are normal. He has that oily look that suggests his skin exists in a state of semi-permanent lubrication due to having all his holes drilled from every possible angle all the time. My initial instinct upon seeing his picture was to suspect that he smells like cheap cologne, stale hummus, and sweaty assholes. He defends Drag Syndrome and puts a uniquely positive spin on their extra chromosome:

As far as I am aware, we are the only drag trouble for drag artists with Down syndrome….When people see us perform, they recognize the immense talent in front of them and the sheer quality entertainment of the artists…people with Down syndrome have the extra chromosome to excel in the arts, culture, and anywhere else.

“My guts violently tugged with the feeling that these poor souls were being exploited.”

Christopher Smit is the cofounder of something called DisArt, “an arts and disability organization committed to changing perceptions about disability one piece of art at a time.” DisArt has been involved in seeking to obtain venues for Drag Syndrome to perform in America. From a wheelchair, Smit expounds upon the intersection of Down syndrome and artistic expression:

Drag has never only been about sexuality. Drag is about gender performance, drag is about expression, drag is also about ridding, um, the culture of really damaging stereotypes. People with Down syndrome, or any disabled person, has at their disposal multiple art forms that they look forward to get out into the world their version of, of life, and their own identity.

Most of this weirdness would have quietly played itself out in the deep and microbe-infested backwaters of the “drag community” were it not for the decision of a ginger-bearded Iraq war veteran and heir to a Midwestern supermarket fortune named Peter Meijer, who in August decided not to permit Drag Syndrome to perform at a building he owns in Grand Rapids, MI. Meijer, who is running for Congress as a Republican, laments that he “didn’t expect Down syndrome Drag shows to be a defining issue of my congressional campaign.”

Meijer claims he invested time and thought in his decision to nix the event and made every effort to consult with local disability activists and parents of children with Down syndrome, who echoed his discomfort with the idea that no matter whether or not the dragsters were adults chronologically, they might not be fully capable of making decisions about camping it up onstage in a blatantly sexual manner:

At the end of the day, the voices that carried the most weight for me were those who have minor and adult children with Down syndrome and local disability activists. If they would have said, ‘listen, we see a lot of value in this even though it may be controversial, and we think it furthers the goal of belonging and inclusion,’ I would have reevaluated my initial gut reaction, but they shared it. Those are the voices that matter to me, the individuals who are closest to this issue and understand the challenges these individuals with disabilities face.

Meijer sent a private letter to DisArt, who decided to make the letter public:

The differently abled are among the most special souls in our community, and I believe they, like children and other vulnerable populations, should be protected….Artistic expression is inherently political, and in making this decision I approached the issue from a content neutral basis….Setting aside the content, the involvement of individuals whose ability to act of their own volition is unclear raises serious ethical concerns that I cannot reconcile. I cannot know, and neither can an audience, whether the individuals performing for Drag Syndrome are giving, or are in a position to give, their full and informed consent.

Last week the ACLU, apparently convinced that the Founding Fathers intended to override the rights of property owners with the rights of people who were defective both mentally and sexually, filed a complaint against Meijer, alleging he was discriminating against the members of this Mongoloid Moulin Rouge not only on the basis of their disability, but also on the basis of sex, if you’re able to wrap your skull around that one, because I’m not.

According to Jay Kaplan, staff attorney at ACLU of Michigan:

If members of the group were to perform an orchestra recital, chances are he wouldn’t have canceled the performance.

Wait a minute—an all-Down syndrome orchestra recital? Yes, please don’t cancel that. I’d fly to Michigan to catch that one, assuming it would be a first in world history. But if this “Kaplan” fellow apparently doesn’t understand the flawed analogy he just made: Unless they were planning an all-nude orchestra recital, the point of sexual exploitation—the crux of Meijer’s expressed concerns—would be moot.

Because of the publicity the case generated, and because the citizens of Grand Rapids apparently have an insatiable lust to watch crossdressing retarded adults twerking in the name of, um, justice and sexual empowerment, Drag Syndrome found another venue and performed for two sold-out nights over the weekend.

Drag Syndrome issued a press release attempting to reassure everyone that its ragtag team of glitter-spackled mental defectives were fully empowered creative influencers who were celebrating the twin blessings of Down syndrome and gender dysmorphia rather than being the useful idiots of somebody’s Big Gay Ego:

Artists who are participating in this show are professional performers, all of whom have careers in the arts. As consenting adults, they have paved their own way into this career, a process that has not been easy, but nonetheless successful.

As bad as the specter of parents nudging along underage drag queens such as “Lactatia” and “Desmond is Amazing” is, this seems just a tiny bit worse because the hapless Mongoloids seem just a tiny bit more vulnerable. And despite—or perhaps because of—the elaborately unconvincing justifications of those who are peddling this freak show, I felt just a tiny bit of a compulsion to pummel them.