This Land Is (Not) Your Land 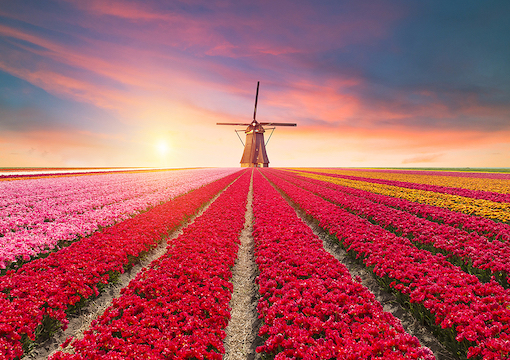 “Buy land,” Mark Twain advised. “They’re not making it anymore.” Perhaps Bill Gates has been reading the American author, as he recently became the largest private owner of farmland in America, quite a retirement allotment. Of course, Gates is perfectly entitled to use his financial reach to buy land without it being called a land grab. But look to Europe, where a governmental takeover of the soil is actually happening, and you will see a civil war in miniature being fought, as wars always are, over land.

The Netherlands—née Holland—may conjure up images of tulips, windmills, and van Gogh, but today its importance is that it is the second-largest agricultural exporter in the world after the USA. Recently, Dutch farmers were told that in order to meet the emissions targets that are all the rage as the latest in wealth transfer schemes, they will have to cut their nitrogen use, particularly in fertilizer. For some farmers, this has consequences such as losing from 30 to 50 percent of their cattle. And losing them means killing them. For others, it means finding a new career.

The Dutch government is in no doubt that farmers are one of the chief enemies of the sacred environment. The Minister of Agriculture, Nature and Food Quality, Hank Staghouwer, states that “in some cases, we’ll have to ask farmers to stop farming. The environment cannot handle so many farmers.”

“Farming has just joined the nuclear family, traditional education, and the sovereignty of nations as one of the new heresies.”

This is an interesting use of “ask,” which usually implies the possibility of polite refusal to proceed with the proffered suggestion, what lawyers call a nolle prosequi. There is no asking going on here. The Dutch government is more in the business of telling. They say that any land bought by the government from dispossessed farmers will be used not only for farming but also as environmental zones. Farms always have been environmental zones, of course, but what really concerns the government is that the food supply is not in their hands but in the hands of traditionalists.

Dutch farmers have not taken kindly to this unwanted revolution being foisted on their industry, piling manure and burning hay bales on highways and blockading food distribution centers in protest. In an echo of Canada’s trucker protests, they have also slowed those highways, and if you think snarling the traffic with a few thousand trucks is an impact statement, try a few thousand tractors. These strange engines are the soul of modern farming, and it is appropriate that they are a symbol of what is becoming the Peasant’s Revolt 2.0. They also represent just one of the industries that will suffer as a knock-on effect from reduced farming.

There have been muted suggestions that the Netherlands and Canada have been selected as test runs for the global reset so desired by the World Economic Forum. Dutch prime minister Mark Rutte is also one of George Soros’ golden boys, along with Canadian show pony Justin Trudeau, adding credence to the theory that their respective countries are dress rehearsals for the new world order. Perhaps it is no surprise that Trudeau is now talking about nitrogen and emission targets. And as a quid pro quo to the Dutch, he has taught them how to deal with vehicular dissidents. Protesting Dutch farmers have been shot at, tear-gassed, and beaten by police.

Traditional farming methods adapt and succeed without the need to ask the state to help out, and they have worked that way for a very long time, which always makes progressives itch. Land is not bought by landscape painters with time on their hands, but for development of one sort or another. In the case of arable land, it is the crop that is the object of the purchase rather than the soil itself. But you still need the soil; you need to gain the ground just as in any war, which is what this is becoming.

Dutch farmers, and those of other European countries, are under siege, and America should at least be pleased that their sons of the soil are not similarly beset. I mean, it’s not as though the Feds are raiding the Amish over breaking farming regulations, right? Oh, wait. This just in. Amos Miller, Pennsylvanian Amish farmer for his local community, was recently raided and faces potential crippling fines and even jail time for infringements of U.S. agricultural laws. In the wake of the Mar-a-Lago raid, the FBI won’t improve their image by shaking down the Amish.

BoerBurgerBeweging is Dutch for “Farmer/Citizen Movement,” and they are beginning to show in the polls. Ordinary people have sympathy for the farmers, and for good reason. When they heard what the World Wildlife Fund (WWF) has to say about the future of Dutch farming, their patience may have begun to wear thin. Natasja Oerlemans heads the food and agriculture department of the WWF, and has a useful suggestion for farmers contemplating a career change:

“Storing water when there’s too much rain—in a densely populated country like the Netherlands, this can produce huge opportunities for farmers to gain extra income and work in the future.”

From maintaining a generational working farm to catching rainwater. There is a level of contempt for tradition here that Dutch and other Europeans are beginning to tire of. One farmer remarked that “Farming is in your heart, and you don’t want to do something else. You’re either a farmer or you’re not.” And the same goes for your children, as farms are regularly passed down through family.

The rallying cry of the protests is “No farms, no food!” although that is only one possibility. Another is “Governmentally controlled farms, some food to approved recipients.” Clunkier but much more in keeping with the times. Governments have controlled food production in recent history, certainly, and it would have been interesting to hear the views of the kulaks under Stalin, Chinese peasant croppers under Mao Zedong, and white farmers under Zimbabwe’s Robert Mugabe before they died from either starvation or machete wounds.

The Dutch demonstrations are doing a better job of uniting Europe than has been managed by the E.U., with similar protests by farmers from Germany, Poland, Italy, and Spain. The political right, the precise people you would expect to protect the farming industry as conservatism is essentially rural, are of course being lambasted for jumping not on a tractor but on a populist bandwagon. It is one of the defining traits of the left, in Europe as elsewhere, that they decry the protection of traditional values and practices as populist and therefore to be attacked and decimated. Farming has just joined the nuclear family, traditional education, and the sovereignty of nations as one of the new heresies.

As always in the modern world, the weaponization of the law is the cannon wheeled to the front of the government ranks. This entire fiasco is the result of a 2019 Dutch court order stating that nitrogen-compound fertilizer was a major threat to the environment. Rather than implement a gradual and exploratory reduction in its use, however, the Dutch mandated an immediate 70 to 80 percent reduction, a single sweep of a bureaucratic pen that is now threatening to turn thousands of skilled Dutch farmers into a new generation of people standing around catching rainwater in buckets. Goodness knows, the Netherlands need such people. It is not as if they are a famously rainy and low-lying country with possibly the best system of canals in the world, or anything like that.

“Who controls the food supply controls the people.” It sounds like George Orwell—doesn’t everything sinister?—but it was Henry Kissinger. The food supply, as every schoolchild who has ever walked past a cornfield knows instinctively, begins with the land. And they may have stopped making it, but they have just started taking it.