This Country Was Not Built by Beta Males 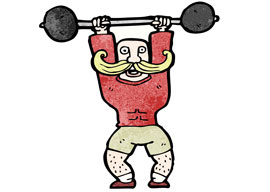 You know the pendulum has swung too far to the left when you say, “There’s nothing wrong with normal” and everyone goes crazy. I was on Huffington Post Live on Monday to discuss “How Masculinity Has Changed Over The Years.” I”ve done this before and it usually goes well. I did a segment for Father’s Day where I introduced the whimsical notion that you”re not a man until you”ve had your heart broken, broken a heart, had the shit beaten out of you, and beaten the shit out of someone.

But when I brought that up on this episode, it was met with sneers and harumphs like I was saying the best way to get a date is to club her over the head and drag her back to your cave. I was told this attitude has led to our culture of mass shootings, and the discussion quickly went from masculinity to femininity.

One patronizing professor claimed there was no empirical data that says men have any latent male characteristics. Huh? There is empirical data everywhere you look. Collectors value vintage boys’ bicycles over girls’ because finding a boys’ bike from the 1950s in good condition is almost impossible. That’s because boys run their bikes into the ground. That’s conditioning? When a doctor makes a cast for a child, she ensures the boy’s cast is fiberglass because boys tend to be harder on it. Ask nannies about the babies they look after and they”ll tell you boys like to wreck stuff and girls like to cuddle. Nobody’s saying these patterns must be enforced. They just exist.

Instead of accepting my opinions as sincere, the female professor on the panel insisted I was scared of empowered women. I rarely talk to people this removed from reality, so it was challenging. In their world, the only reason men have a reputation for being tougher than women is because they”ve been conditioned to act that way. In their world, women earn less because of sexism. Women aren”t in math and sciences because they”ve been discouraged from pursuing it, etc. You”ve heard it all before. To them, gender roles are a kind of performance art and we should all be fine with a 130-pound firewoman carrying us from a burning building.

Meanwhile, on Earth, we just want to put food on the table so our kids stay healthy. If a qualified female shows up to work on a project you think, “Good. Maybe we”ll get out of here early.” Nobody doesn”t want her on the job. Nobody is “scared” of her. College professors don”t know this because they don”t work for a living. They”re paid to pontificate, and even then they get to go on sabbatical and pontificate even harder. (I believe the woman I was arguing with was on sabbatical during this debate”I was at work.) Despite how we all feel about women in the workforce, the panel kept implying I felt threatened by qualified women.

I tried to explain that my motives were benevolent. I live in New York, an elephant’s graveyard for ovaries. From where I sit I see women who put career over family and are now in their 40s, drenched in regret. I cited a study that said women are less happy since feminism took root. The professor called it a “fantasy study.” This study was all over the news a couple of years ago. How could none of them have heard of it? I thought we were all on the same page on the “Myth of Having it All.” Didn’t everyone see the New York cover story on “The Feminist Housewife”? Or the 60 Minutes episode about “opting out“? It’s called biology. We”re at the point where it’s sexist for a doctor to explain that the hourglass of fertility is turned upside down at 30 and is all but empty at 35. But for the left, anecdotal evidence of that one lady who had a kid at 42 somehow represents 3.5 billion women.

The quote that generated the most controversy was when I said:

I would guess seven percent [of women] like not having kids. They want to be CEOs. They like staying all night at the office, working on a proposal, and all the power to them. But by enforcing that as the norm, you’re pulling these women away from what they naturally want to do, and you’re making them miserable.

Have you ever heard anything less controversial in your life? You”d have to be a fucking idiot to think I was saying anyone has to be a certain way.