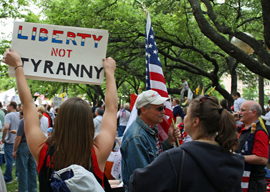 Someone got stabbed at my DePaul talk on Tuesday night and that’s not even the craziest part. The talk had already been canceled, but the protesters showed up anyway and demanded that everyone stand together to fight hate. It takes a particularly spoiled brat to keep bitching after he gets what he wants. They claimed that the Proud Boys and I stand “side-by-side“ with Jeremy Christian, the nut who stabbed three people on an Oregon train last week. Christian is a Bernie Bro who voted for Jill Stein and wanted to kill everyone who voted for Trump, but because he praises free speech, we”re basically the same person.

The left’s version of the train stabbings is that a Nazi was trying to kill Muslims and three heroes stepped in to save the day. I don”t want to downplay their bravery, but it’s just as likely this ranting retard is like every other crazy person you see on public transit and could have been quietly ignored. Every day in New York City I walk by some screaming schizophrenic threatening to kill everyone in sight. Street smarts is mostly about knowing when to engage. In the case of Maksim Gelman, Joe Lozito was left with no choice but to take the man down. Gelman was a serial killer who was attacking people with a knife and had already killed four (he’s currently serving 200 years for his crimes). I”m inclined to see Christian as less of a threat. I actually spoke to someone who said he knew the man and he described Jeremy as a paranoid loser who thought everyone hated him. He told me about a party Christian was at where, after everyone decided to leave the party and go to a bar, Jeremy snuck back and broke into the house, assuming others were still in there having a party without him. He is yet another EDP (emotionally disturbed person) who uses random political dogma to try to make sense of a world beyond his control.

“By allowing these sociopaths to shut down free speech with violence you are all but demanding a war. Okay, fine, you got it.”

Once again, despite a mountain of evidence to the contrary, we”re supposed to believe the right is about hate and violence while the left just wants to protect the oppressed from WWIII. I can”t help but think this paranoia is rooted in Jewish trauma. My esteemed colleague Michael Hirschorn is a successful writer and TV producer who sounds totally sane about pretty much everything until the subject of Trump comes up. Then he becomes unhinged and talks about being taken away in the middle of the night by some new Gestapo. He admits that much of his philosophy comes from the horrific stories his Jewish father told him of the war. Cartoonist Peter Kuper is another Jew I love who falls into a pit of hysteria when Trump comes up. Even back in the early 2000s he was talking about Trump taking over New York City and segregating the poor into government-run ghettos. He’s lived all over the world (including Africa) but chose the American South last because he was scared of rednecks. I”ve argued with both these guys quite a bit but we never get anywhere.

Their belief system is what I hear anti-Semites blame for the culture wars, and while I”m willing to accept that the origins of this mess may be linked to Jewish academics spooked by their parents, my beef in 2017 is with people of all backgrounds. It was affluent whites who poisoned Robert Spencer in Iceland. It was rich white kids who were hammering us with bike locks in Berkeley and throwing bricks and bottles at our heads. The Jews didn”t pepper-spray me at NYU, liberals did, and that is the common denominator here. The left has become so violent, they resemble Jeremy Christian much more than we do. We”re told a Milo fan shot some random kid in Seattle, but I spoke to Milo about this and he says it was an antifa kid who was wearing brass knuckles and punching people waiting in line. Eventually the guy throwing punches met someone who was armed (Yiannopoulos also told me he has video of all of this).

My talk was canceled at DePaul because the president decided I was “too dangerous.” We created the Proud Boys to protect ourselves and others who were being attacked at speaking events by anarchists who hated our anti-big-government views. The mayor in Berkeley told the police to stand down. What do you expect us to do, say, “Yes, sir, may I have another?” every time someone tries to kill us? I”ve heard rumors the mayor of Portland is going to tell his police to stand down at some forthcoming alt-right events in his city. He’s using the Christian stabbings as proof that the right is violent, and claiming that having any related events would foster a little too much hatred for now. This is infuriating because it solidifies the lie and makes it part of history. The right isn”t violent. The left is. By allowing these sociopaths to shut down free speech with violence you are all but demanding a war. Okay, fine, you got it. It’s official. This is a war.