This Week in Atonement 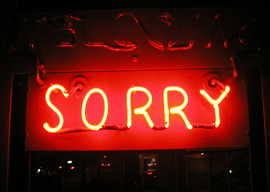 Who says American manufacturing is dead? The nation has cornered the international market on making amends. Apologizing is a thriving industry. Call it Big Sorry.

It wasn”t always like this. The “Checkers” speech, with its low-key, almost sunny defiance, is a kinescope relic. Today, Nixon’s office would”ve issued a weasel-worded statement and given back the dog.

Here’s the highlight reel of this week in atonement:

“¢ Los Angeles disc jockeys John and Ken apologized for calling the late Whitney Houston a “crack ho.” Actually, they were speculating that other people were calling the singer that name behind her back while she was still alive, but why split hairs?

“Who says American manufacturing is dead? The nation has cornered the international market on making amends.”

“¢ After Jeremy Lin’s spectacular game against the Lakers, black Fox Sports columnist Jason Whitlock Tweeted, “Some lucky lady in NYC is gonna feel a couple of inches of pain tonight.” The Asian American Journalists Association (!?) demanded an apology and got one, although Whitlock blamed his “immature” sense of humor on all the Richard Pryor albums he listened to as a kid.

“¢ Another black reporter was excoriated for his Tweets, this time of the “homophobic” variety. CNN’s Roland Martin joked that any man who enjoyed David Beckham’s Super Bowl underwear ad needed something called the “ish” “smacked” out of him. Martin was suspended, CNN apologized, and now the unfortunate broadcaster has “agreed” to “meet with GLAAD.” (Side note: Black people really like Twitter.)

After he joked that “rehearsal is for fags,” Brett Ratner lost his job directing the Oscars. As penance, he’s been roped into directing a new video campaign for, why yes, GLAAD as a matter of fact.

(Is anyone else beginning to suspect that GLAAD’s well-oiled outrage machine is just a Heath Robinson device designed to lure rough trade into their offices?)