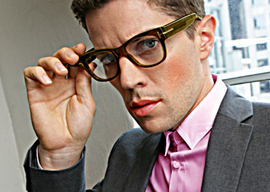 I have a confession to make to all my straight male friends:

I thought you were gay.

Call it a hazard of big-city living: I’ve automatically assumed every guy I’ve met over the course of the last twenty years was homosexual, then I worked my way backwards as evidence of his straightness piled up. (Say, spontaneous, repeated expressions of appreciation for Monica Bellucci, MotÃ¶rhead, or both.)

Can you blame me? Consider the allegedly straight dudes you see on the subway, at the office, and at the coffee shop, sometimes with wives and even offspring in tow. Add up all the man-purses, the too-visible hair “product,” the pretentious eyewear, the borderline anorexia, the Tintin hairdos, the finicky food fetishes, and the little dogs in adorable outfits. (The Marquess of Queensbury was accidentally ahead of his time.)

We started mocking this personal style as “metrosexual” almost twenty years ago, but that word was always problematic. The “metro” prefix is utterly apt; it’s the “sexual” part that’s off. These nominal heteros are consciously or subconsciously mimicking gay twinks, and those fellows usually want to get laid. Their fragile straight counterparts, in contrast, don’t look like they could manage it, or even want to.

“I’ve automatically assumed every guy I’ve met over the course of the last twenty years was homosexual.”

Back in the 1960s, hard hats complained they couldn’t tell the boys from the girls anymore. But at least hippie guys”from Spahn Ranch to the Weather Underground townhouse”were obsessed with sex. These days, a guy who expresses too much interest in getting girls into bed can end up on an SPLC “hate group” list.

In that much maligned “manosphere,” the term “beta male” is the most popular pejorative. Since it’s fresher and more accurate than “metrosexual,” I’ll be using that phrase henceforth, along with that unfairly neglected anachronism “faggotry.” It’s ideal for my purposes because it doesn’t necessarily mean “gay” so much as “gay-ish.” So I’m trying to bring that word back. Call it artisanal invective.

“¢ With the fruity blond Latino voted off, the remaining male contestants on American Idol are the fruity black dude and the fruity dark Latino (who really does look “laminated”). Earlier this season, a leading male contender named “JDA””pronounced “JADE-a””wore dresses, makeup, face veils”and five o’clock shadow. Then when one of last year’s semifinalists returned to perform, he sported a full beard and a bun in his hair, looking like the bastard son of Grizzly Adams and Frau BlÃ¼cher. At one juncture, the most macho guy on the AI stage was the 2012 winner: shy, ectomorphic Phillip “You Can Tell I’m a Vegan Just by Looking at Me” Phillips.

“¢ An advice column at the Disney-owned parenting site Babble gave new moms and dads one more thing to panic about: the “Bronie” phenomenon. Did you know “there’s an entire culture of grown men that love [the 1980s children’s cartoon] My Little Pony?” That these “men” collect the colorful equine dolls and play with them? That this culture comes “complete with conventions and tattooed ‘cutie marks’…”? The advice lady adds, “I’ll be proud if my son joins your ranks.”