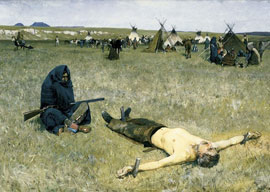 On July 2, Facebook’s indefatigable legions of Hate Robots censored a post as “hate speech” because it dared to contain a passage from the Declaration of Independence:

He has excited domestic insurrections amongst us, and has endeavoured to bring on the inhabitants of our frontiers, the merciless Indian Savages, whose known rule of warfare, is an undistinguished destruction of all ages, sexes and conditions.

What was ignored in the predictable Sanctimony Bloodbath that ensued was the broader context of that quote. It quite uncomfortably implies that King George was actively trying to crush the American colonists by fomenting race war against them. And this is true—is a documented fact that in 1775, General Thomas Gage, leader of the British Army in America, ordered his Indian allies to “deliver war upon the colonists.”

So the only remaining bones of contention in this grisly boneyard involve whether the Natives were merciless, savage, and whether they destroyed all ages and sexes.

“The only thing inaccurate in the term ‘merciless Indian savages’ is the word ‘Indian,’ but facts don’t matter in an era where moral outrage is on the warpath.”

In 1622, a robust century and a half before the Declaration of Independence, an Indian raid in the white settlement of Wolstenholme Towne in Virginia killed 78 settlers—men, women, and children. It is still the largest mass murder in Virginia history.

But, um, that’s because they were fighting to preserve the land that the white man was coming to steal! Before that, they were a peaceful race of corn-nibbling, pipe-sharing Gaia-worshippers…right?

Among all archeological sites ever excavated across the globe, it appears the one that shows the highest rate of violent death was among Pueblo Indian ruins in southwest Colorado sometime in the mid-1200s—almost 90% of human remains there showed violent trauma to the head or arms. Crow Creek remains in South Dakota from around 1325 AD show a violent-death rate of 60%. Victims had been starved, scalped, mutilated, and dismembered.

According to Harvard psychologist Steven Pinker:

Contra leftist anthropologists who celebrate the noble savage, quantitative body-counts—such as the proportion of prehistoric skeletons with axemarks and embedded arrowheads or the proportion of men in a contemporary foraging tribe who die at the hands of other men—suggest that pre-state societies were far more violent than our own.

Contra modern revisionist images of a Harmonious Red Rainbow that was nonviolent until the White Ghosts arrived, Injuns were slaughtering one another long before a freckled toe set foot on this continent. The so-called “Five Civilized Tribes” of the Southeast routinely conducted murderous raids on one another. And the Lakota, once they acquired guns from the Evil White Man, proceeded to blast neighboring tribes to smithereens.

In the 1600s, the Iroquois acquired a reputation for merciless savagery toward other Injuns. In 1642 a Jesuit priest related the tale of an Algonquin Indian being slowly tortured to death by a band of Iroquois raiders:

They continued this torture throughout the night, building to a fervor, finally ending at sunrise by cutting his scalp open, forcing sand into the wound, and dragging his mutilated body around the camp. When they had finished, the Iroquois carved up and ate parts of his body.

If you were a Paleface unfortunate enough to be captured in the American-Indian Wars, you could look forward to the following displays of forgiveness and high culture:

Common torture techniques included burning the captive, which was done one hot coal at a time, rather than on firewood pyres; cutting with knives, beatings with switches or sticks, and jabs from sharp sticks. Prisoners’ fingernails were ripped out. Their fingers were broken, then twisted and yanked by children. Captives were made to eat pieces of their own flesh, and were scalped alive…the execution of a captive, especially an adult male, could take several days and nights.

A 1900 Australian newspaper account titled “EATEN BY RED ANTS” describes the abundantly merciful and not-at-all savage punishment doled out to a white man who fell in love with a girl from the Mayo Indian tribe in Mexico:

He was eaten alive by red ants. The prisoner was bound upon the ground, with his eyes turned upward to the broiling sun. He was within 10ft. of the ant hill.…Even at the first touch of the insects he shrieked with agony….They covered his legs, they swarmed over his body, they filled his mouth, nose, and ears. They not only devoured his flesh, but they poured formic acid, a biting corrosive acid, into the wounds.…The Indians looked on with grim and gloomy satisfaction, smoking their pipes as their vengeance proceeded.