Thou Shalt Not Hate Beards 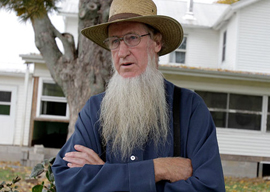 Reality has made quoting Malcolm Muggeridge impossible. That’s OK by me, because between his willfully ignorant campaign against Life of Brian and his equally problematic crush on Mother Teresa, I never liked him anyway.

But give credit where it’s due: Muggeridge originated the observation while he was the editor of Punch that modern life’s absurdities had made the satirist’s role redundant. (Surely the spectacle of one satirist later condemning others for irreverence counts as one of those absurdities.)

Hell, forget something as lofty as satire: What about plain old goofy jokes? Since September 12, 2001, I’ve enjoyed asking those who insist that “all religions are exactly the same” if they can recall the last time the Amish flew planes into skyscrapers.

The Amish’s reputation as magical Caucasians“noble, hardworking pacifists who just want to be left alone”has been burnished, ironically, by one of those “English” inventions they abhor: the movies. Thanks to heavy rotation on TV, Witness has been paying healthy goodwill dividends since 1985.

But after Devil’s Playground (2002) taught smug media hipsters the word “Rumspringa” and revealed the community’s cracks, they embraced the Old Order as their new favorite “offbeat” minority. “Amish” has become the laziest punch line since “mother-in-law.”

Reality TV came calling, but results are mixed. Amish in the City lasted only one season. Breaking Amish and Amish Mafia have been renewed despite production sins of omission and commission, respectively.

America can’t make up its mind about the Amish. That shocking 2006 Amish schoolhouse massacre prompted many to look upon them as slender beacons of supernatural sanctity in a sick world.

Yet despite evidence that the “Amish Mafia” is a work of exploitative “English” fiction, it’s hard to shake the suspicion that there’s more sinister going on in Amish country than a stubborn refusal to stick orange safety triangles on buggies.

What if Deadly Blessing was really a documentary?

Frankly, I don’t see how the Amish contribute anything to society at-large aside from the occasional pie. Like all parasitical pacifists, the Amish can only act out their utopian fantasies thanks to the forbearance of sinful outsiders. Their vaunted self-sufficiency is a pose, and their “humility” sure is showy.

But even I don’t think a bunch of them deserve up to fifteen years in prison for cutting their neighbors’ hair.

How did a long-simmering internal theological dispute about the length of their brethren’s beards get turned into a federal “hate crime” case? When did transporting scissors across state lines become a felony and cutting someone’s hair”even against their will”a “bodily injury”?

When the federal government said so, of course, waving around a 2009 “Hate Crimes Prevention Act” that “honors” the victim of a non-hate crime (but don’t point that out or you might get charged with, well, you know).

You see, these Amish-on-Amish attacks were “religiously motivated.” That makes them federal “hate crimes.” Obviously!