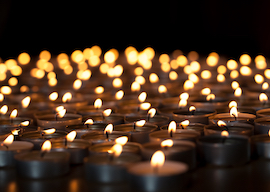 A young British woman called Grace Millane was making her way round the world after graduation from university when she was murdered in New Zealand. A 26-year-old man has been arrested and charged with the crime.

I hope I do not have to explain that this was a horrible crime. Indeed, if someone did not already understand it, I do not know how I could explain it to him. It would be like trying to explain mathematics to fish, or grammar to walruses. I cannot envisage such a man saying to me after my explanation, “Ah, thank you, now I understand that murdering a young woman is wrong!”

All over New Zealand, however, there has been an outpouring of emotion, or at any rate of public displays of emotion—there being no point in having an emotion unless you can show it in public. The candles have come out en masse, as it were, and have been lit in prominent places at what are called vigils. People at these vigils—mainly women, to judge from the photograph—stand around and look mournful, and I daresay they hug one another. They shed tears, as the prime minister of the country was said nearly to have done as she apologized to the parents of the victim on her country’s behalf.

Do people have vigil candles at the ready at home, and joss sticks, just waiting for the occasion to demonstrate to the world the depth of their feeling and their inner goodness, or do they have to go and buy them and, if so, from where? It all seems very peculiar to me, this outpouring of kitschy emotion.

It is not confined to New Zealand, of course. Perhaps the greatest exhibition of it was after the death of Princess Diana; but these days, we have come to expect the lighting of candles whenever anybody loses his life in an unusual or spectacular way. No sooner had three people been murdered by a Muslim terrorist in Strasbourg, for example, then out came the candles, as if they had been held in waiting precisely for such an event as this. With what contempt must sympathizers with such terrorism view this response; how much encouragement it must give them that their opponents, though overwhelmingly numerous and wealthy, have no stomach for a fight and have all the courage of mice!

“It all seems very peculiar to me, this outpouring of kitschy emotion.”

The prime minister of New Zealand was not the only public figure in her country to apologize; several others did so. These apologies were, of course, both costless and meaningless. The people making them were not remotely responsible for the murder, and therefore could not have felt anything remotely resembling genuine guilt. They were simply preening themselves by apologizing. If history shows anything, it shows that, even in the best of social circumstances, murderers will occasionally arise, and as far as can be known, no official in New Zealand, by act of commission or omission, caused the murder.

It is not even as if the murder rate in New Zealand is particularly high by international standards. In fact, it has been declining of late years, perhaps as a result of its three-strike legislation, according to which a person who commits a serious violent offense for a third time automatically receives the longest possible prison sentence for that crime without possibility of parole. Interestingly, this year so far (and we are near the end of it), 1,158 people have been convicted for a qualifying offense for the first time, 82 for the second time, and a mere four for the third time. While we must exercise caution in the interpretation of these figures—for it is in the nature of the modern world that official statistics are manipulated in many different ways and by many different methods—they nevertheless provide prima facie evidence for the effectiveness of the policy, and support for the idea that the cause of crime is the decision to commit it (indeed, where there is no such decision, there is, by definition, no crime), and that the decision itself is taken partly on prudential grounds, among which is the likely severity of punishment.

But what do all the neo-pagan ceremonies, not only in New Zealand but throughout the rest of the Western world, signify? What do all the candlelighters think that they are doing, and whom benefiting? I doubt that they have any deep conviction of the existence of a life after death, though perhaps a few of them are the modern equivalent of the table-rappers of the past or latter-day followers of Madame Blavatsky. Probably most of them would claim to be spiritual but not religious, that ghastly phrase that is unctuously self-congratulatory, in that it implies that the person who says it of him- or (more frequently) herself is not crassly materialistic, believes that there is something to human life over and above the day-to-day flux of getting and spending, and is an all-round good person, unlike most of humanity.

Now, of course I believe that if people want to light candles and joss sticks, leave teddy bears and flowers wrapped in cellophane, etc., whenever there is a highly publicized death that is out of the ordinary, I think that they should be allowed to do so, though I wish they wouldn’t, just as I wish people wouldn’t get drunk. Nevertheless, there seems to me to be something faintly coercive about these public demonstrations of emotion, as if those who do not join in are somehow failing in their duty or are lacking in proper feeling. If you don’t light a candle, you don’t feel deeply, and therefore (in the case of a murder) you are insufficiently against the crime. In short, you are not a good person.

No sooner is there a terrorist outrage such as the recent one in Strasbourg than politicians scramble to let it be known that their thoughts are with…etc., etc. This is plainly bilge. Their thoughts are I had better say something or the electorate will think that I am unfeeling and don’t care, and then where will my chances of reelection be? And this is symptomatic of the emotional falsity of our age, a consequence of the decline of religious belief and cultural confidence; an age the emotional life of which is too shallow to be plumbed.

Theodore Dalrymple is the author of Grief and Other Stories