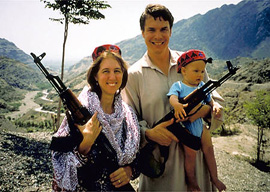 As someone who just handed his memoirs to Simon & Schuster, I am very sensitive about the concept of fake stories. For example, after writing about a threesome I was sure had taken place in 2002, I remembered that Finding Nemo was playing in the background when it happened, and that movie didn”t come out until 2003. In my manuscript, I offer a $1,000 prize to anyone who finds a major untruth in the book. “I think you should take out that promise,” one of the editors told me. “It’s too ambiguous.” I told him to leave it in and corrected the Nemo mistake.

The problem is, James Frey has diluted the whole idea of what constitutes a true story. He published a book of fake memoirs and became not only a very successful writer but a formidable publisher in his own right. After publicly apologizing on Oprah, Frey now says he regrets his former regret and argues there’s no such thing as truth. For those of us whose youth really was wasted on heroin, orgies, fistfights with skinheads, acid trips, jail, squatting with anarchists, punk bands, vandalism, police chases, and dead friends, this is a slap in the face. I heard James Frey’s name so often while I wrote my book it became a verb. “I know you wish that story had occurred before you met your wife,” the editors would say, “but you can”t Frey it.”

“My major beef with scam artists is that all of them deserve to suffer far more than they ever do.”

In the movie Shattered Glass, the dramatic retelling of Stephen Glass’s fake reporting at The New Republic, the secretary says
to the editor, “That’s what happens when you don”t have pictures.” I saw the movie here in New York and as audiences here are wont to do, they laughed at her working-class naÃ¯vetÃ©. I”m not sure why. She was right. I spent weeks gathering photographic evidence for my stories, including pictures of several threesomes. I stand by everything in the book, or I wouldn”t be offering a prize.

But Three Cups of Tea author Greg Mortenson used a photo of himself and Pakistani intellectual Mansur Khan Mahsud as “evidence” the Taliban had kidnapped him. Mahsud is planning to sue Mortenson because he was hosting the vagina-faced philanthropist, not terrorizing him.

While watching Mortenson being exposed on 60 Minutes
I prayed he was going to be confronted with his lies and start stammering in front of the camera before collapsing into a big ball of tears”but it didn”t happen. It never does.

Stephen Glass had been on 60 Minutes too, but he was proudly promoting his book The Fabulist, a rollicking chronicle of his fabulous lies. The New Republic‘s literary editor was enraged and said, “The careerism of his repentance is repulsively consistent with the careerism of his crimes.”

After leaving a permanent dent in The New York Times” credibility, Jayson Blair wrote an unrepentant book called Burning Down My Master’s House. He’s a life coach now who calls himself a “sensational reality enhancer.”