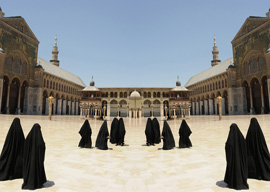 The Obama regime’s official explanation for the murder of our ambassador to Libya and three staffers amid the destruction of our Benghazi consulate”that it was spontaneous and quasi-legitimized by an anti-Muhammad film”seems to be unraveling. But perhaps more importantly, it points out the insanity that has been US foreign policy from Morocco to Afghanistan since World War II.

Dubya dubbed this policy the “global democratic revolution””the idea that given the right combination of idealistic leadership and US-supported regime change, the Middle East’s civic life would magically transform into that of Ray Bradbury’s Green Town, Illinois. To these dreamers, 2011’s “Arab Spring” seemed proof that in the Islamosphere, American-style rule of law was right around the corner. But even as their ears were oblivious to the dying cries of Iraq’s Chaldean and Assyrian communities, so have they been to those of Coptic and Syrian Christians. One would think the death rattles of American diplomats might at least catch their ears, but no such luck.

“Due to religious and cultural histories too complex for the average American politico or bureaucrat to understand, the Muslim world is mind-numbingly fragmented.”

Due to religious and cultural histories too complex for the average American politico or bureaucrat to understand, the Muslim world is mind-numbingly fragmented. Internal peace in any given region or country has inevitably been imposed from outside. As the topmost clique in each was small and usually alien, the rulership was constrained to govern through and with coalitions of minority groups”a pluralism dictated by necessity rather than ideology. This pattern was disrupted by the West’s growing power, culminating in the Ottoman Empire‘s defeat in World War I and subsequent deposition of the Sultan and Caliph.

Then followed the first of three waves of Westernization. This wave saw various traditional rulers that the West”especially the British and French”either raised or reinforced. Among them were the rulers of Morocco, Libya, Egypt, Tunisia, Iraq, Jordan, Iran, Afghanistan, Yemen, southern Arabia, and the Persian Gulf states. There was much to criticize about these regimes: no separation of religion and state; hereditary monarchy; minority rule; inefficiency; suspicion of modern education; rampant cronyism; limits upon freedom of speech, religion, and the press; and governmental legitimacy founded on legends rather than elections. But what these criticisms failed to understand is that in this region, majority rule inevitably means minority oppression.

And so we helped bring to power in various countries people such as Nasser, the Ba”ath Parties, and Gaddafi”they were Westernization’s second wave. They initially had much to recommend them to American policy makers. These revolutionaries broke down old aristocracies and tended to be secular rather than religious. They introduced the form”if not the substance”of republican government. They had a few small drawbacks. So long as the Soviet Union lasted, they were often pro-Soviet; they too were forced to rule through minorities; and as their regimes aged, they tended to become ever nastier in terms of bloody repression. So throughout the past two years, we have encouraged their overthrow in the “Arab Spring” and its aftermath.