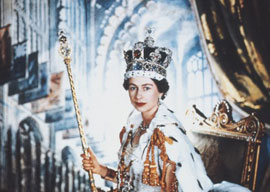 Probably it’s just my simpleminded arithmomania, but years ending in the numeral three seem to be more memorable than average, both publicly and personally, for reasons high or low.

In 1953 the public became the personal. This was the year of the Coronation, the first public event to impinge on my consciousness.

We kids all got Coronation mugs“my sister still has hers. There was a street party with free cake and desserts. Most people were happy for the pretty new Queen, although my Dad, a sour republican, took it all as one more opportunity to grumble about “those bloody Germans.”

England was bursting with children in 1953: My elementary school overflowed, so that my class was decanted to an annex in a local church hall. England was still a real nation, too, not yet a flophouse and welfare office for all the world’s beggars, thieves, and lunatics. We were named after kings, queens, and Bible characters. The street games we played were centuries old. That a citizen might be arrested for carrying the nation’s flag was beyond inconceivable in 1953.

“Years ending in the numeral three seem to be more memorable than average.”

Coronation aside, the public world came filtered through the tabloid newspapers my parents favored. Tabloid headliner of the year was John Christie, who had murdered at least eight women. Christie was arrested in March, tried in June, and hanged in July. Justice was brisk back then. Abundant, too: Twelve other people were hanged that year in England, one a female.

1963 was the year when sexual intercourse began, according to Philip Larkin. Sex certainly had top billing in the public sphere.

For me personally, Larkin got it precisely right. Sex didn”t come easy, though: I had to walk for it.

My partner in exploration and I were both living at home. Neither of us had a car. I would spend evenings with her in her parents” living room”talking, reading, listening to music, and writhing with lust”until the parents went to bed at ten-thirty. Then we would copulate on the living-room carpet, whose color for some reason I remember with perfect clarity: a fetching pale shade of cerulean.

By the time we finished, the town’s meager bus service had shut down for the night, so I had to go home on foot. Her house and mine were on opposite sides of the English country town we both inhabited: four miles as the sated lover stumbles. I didn”t mind. To this day I have found nothing so conducive to a good night’s sleep as a long post-coital walk.

One minor additional inconvenience was a certain aid to male sexual hygiene that my fastidious mistress would not allow me to deposit in her family’s garbage. Nor in neighbors” hedges: She made me promise to walk at least the length of the street before I discarded the thing.

On one occasion I still had it when, halfway through the walk home, I passed the town’s General Hospital. King Edward VII had dedicated the place, and there was a bust of him on an inscribed plinth in an alcove set into the hospital wall. Feeling irreverent and perhaps having internalized my Dad’s republican scorn, and the streets being perfectly deserted, I fixed the unwanted item, loaded with its pale cargo, over His Majesty’s nose. Then I staggered on homewards whistling a happy tune”quite possibly indeed one from The Beatles” first LP, which had come out that spring.

1973 is best forgotten. I spent much of my late twenties in the grip of a shameful psychological affliction whose symptoms have been described by much better writers than me. The year 1973 was the lowest trough of the thing, a chronicle of wasted time.

But even in this misery there was a silver lining: I came to the USA for the first time and fell in love with the place. I went back to England five years later, but I think that from 1973 on it was foredoomed that I would die an American.