Throwing People Under the Bus to Stop a Runaway Vehicle 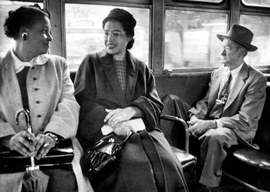 The recent pillorying of John Derbyshire and Bob Weissberg after being accused of making tactless remarks about race recalled a question that’s been bothering me for decades. Why should we think that race is the only untouchable subject or the only issue that, to use George Will’s misleading phrase, we as a society agreed to turn into a “stone, cold, dead, closed question”?

Yes, I know there used to be slavery and segregation, and then a civil-rights movement came along that raised our spirits to new, hitherto uncharted levels of tolerance. Because of this experience we agreed”or someone agreed for us (I was never asked my opinion)”not to discuss the forbidden subject in such a way that black spokesmen or their white liberal proxies in the media would find objectionable. I suppose this agreement was made in the same way as the one binding those who leave the state of nature and enter civil society in Hobbes’s magisterial work Leviathan. There the newcomers don”t have to agree to anything explicitly, but by hanging around, they implicitly consent to the arrangements that someone else set down for them. In a similar manner I have agreed not to broach forbidden subjects by not leaving a country the MSM rules.

“The left is not going to be stopped in its tracks by signs of weakness.”

With the towering prohibition against expressing politically incorrect views about race, why would anyone be naÃ¯ve enough to believe that the demand for total consent will ever stop? The same bullying tactics that have been applied here have been extended to everything else that the left and its obliging conservative-movement collaborators have tried to keep from being mentioned. The left trots out the same victim narratives to shut us up about gender differences, our preference for heterosexual over homosexual family organization, or whatever else they deem unmentionable at a given moment. My friend, distinguished classicist Chris Kopff, says that at the university where he works it’s Christianity”not racism”that gets singled out as the villain. Anyone linked to Christian belief has to answer for the Crusades, the Inquisition, the Holocaust, and many other iniquities that are traced back to Christianity’s inherent intolerance.

Those whom Pat Buchanan describes as the “kennel-fed conservatives” are desperate to curry favor with the media and centrist Republicans. These survivors rail against that ole debbil white racism, which appears to agonize them as much as it does the left. This Sturm und Drang allows them to address other moral issues such as getting Mitt elected president. These establishment conservatives may even occasionally suggest something that is indelicate about gender differences or declare their sympathy for heterosexual relations, and so far they have been able to pull this off without getting instantly zapped. These get-along types also get steamed up that others are noticing cognitive differences between racial groups. After all, can”t we all do equally well in our propositional nation that was founded on the principle of equality?