Time to Fly Away 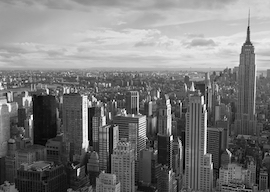 NEW YORK—At times I used to think the place was real. The New York of films, that is. The reality is an urban agglomeration of millions, most of them with a disinclination to speak English, and then there’s the celluloid city of 42nd Street, Annie Hall, Dead End, Rear Window, and King Kong. This is the dream city I keep writing about, the one that stabs you in the gut because it’s gone, and it gets worse when you accept that it was never there. Like the woman of your dreams who has lost her looks and your best friend tells you they were never there.

And yet, they must have been because I lived them. I mean the opening nights, the cocktail parties, the beautiful women, El Morocco and the Stork Club, the bright avenues and mysterious side streets, the yellow but comfortable Packard taxis, the bejeweled women on Fifth Avenue, the obliging doormen of the Sherry-Netherland dressed as admirals, the blond Irish cops, the penthouses of the rich, whose manners matched their pocketbooks.

All gone. Broadway tickets back then were two bucks in the gallery and nine bucks up front. A typist made fifty a week, and an aerospace engineer 300 per. Movie houses charged a dollar, and a burger and fries at P.J. Clarke’s—the all-night most popular pub in Manhattan—could be had for ninety cents. And there was Times Square, Holden Caulfield’s playground and even young Taki’s when playing hooky from boarding school. Times Square was paradise for every horny 15-year-old, and then some: peep shows and strip clubs, and hardcore gay places we never knew existed. I remember paying ten cents per dance at Danceteria, making a deal, and then waiting until dawn for her to come out, sometimes with a brute next to her who told me to get lost, other times reluctantly going along, concerned about my age. “You don’t look 18…” Those were the seedy glory nights of Times Square, before the place was cleaned up and totally ruined. Now it’s one long electronic advertisement, even the great Camel cigarette smoker is long gone.

“I’ve had a good time in the Bagel and am always reluctant to leave it, but nostalgia has its limits.”

And yet, some of it was real, and not only in the movies. I watch the faded, rain-soaked city I once adored, crisscross its grand thoroughfares, look at the glass intruders where once upon a time my favorite cafés and ballrooms used to be, their warmth existing in a mist-bound memory of youth. At night I look at the Empire State and Chrysler buildings, a beautiful pair, with a different hue every night, the Empire in its boxy suit, the Chrysler in its filigreed dress. Funny that the master of solitude and nostalgia, Edward Hopper, never painted those two. Much too big, I guess.

And now I’m winding up and heading for good old Helvetia. My annual Christmas party is on the 14th and then it’s home sweet home. There’s no more Eagle club, as the barbarians are inside, so I’ll be skiing elsewhere, on far better slopes and in far better company. Have any of you ever heard of Selena Gomez? Apparently she was big once, and she’s on the comeback trail. Her newest song is titled “Taki Taki” with one Cardi B and is No. 1 on Billboard’s Dance/Electronic Streaming chart, whatever that may be.

I’ve had a good time in the Bagel and am always reluctant to leave it, but nostalgia has its limits. As I get older I sometimes find myself confusing fictional New York with the one I lived in. I suppose that’s normal. I first saw the place at the impressionable age of 11. After Athens, where the tallest building was five stories high, Rockefeller Center was mind-blowing, never mind the Empire State. But as always it was the people who made the difference. Gangsters were glamorous back then; they wore fedoras, wide suits, and two-tone shoes. They stayed uptown and killed each other, never us. Now I have trouble distinguishing those who live in my building—supposedly one of the grandest of Park Avenue—from the construction workers speaking Spanish across the yard. I take my breakfast every day in a coffee shop nearby. I like to sit outside no matter the weather conditions. Listening to some of the youngsters walking to a university next door astounds me. Everything is about their feelings toward a piece of clothing or a rap song, never about an idea or a world event.

So what does an older man do when alone in a city that once offered a lot and now, less than zero? Well, last week I went up to Provincetown for Michael Mailer’s mother’s memorial. I spoke a few words, met a lot of artistic people—she was a beautiful actress of the ’50s and ’60s, Beverly Bentley—and came back with a hangover that lasted for a good week. Provincetown is now mostly a gay town, a bit honky-tonk, but what shocked me the most was when we filmed a documentary in Norman Mailer’s last home. There was a plaque outside, but inside—it has since been sold to a private buyer—there was not a single book in sight. The bare walls brought on a sense of loss as I had been there when Norman was alive and the place was dripping with them. I guess it’s a sign of the times. Less books, more rap, more sci-fi, English no más, manners no más, girls no más, time to fly away.