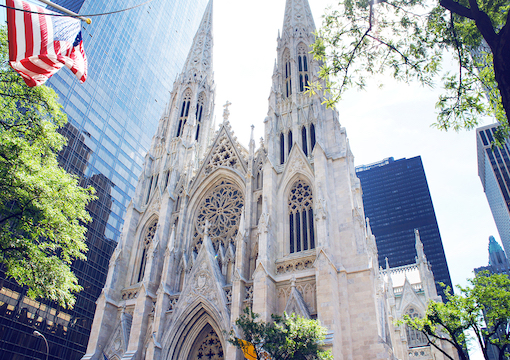 The following was recently but ecstatically pronounced by the malignant, anti-white, anti-Christian, and anti-male New York Times: “Perhaps for the first time since the United States was established, a majority of young adults here do not identify as Christian.”

Yes, you read this right, the Sulzberger gang who owns the paper and adheres to the Jewish faith celebrates this sorry state of affairs with a bold headline in its editorial pages. Nicholas Kristof, the writer, tries to underplay his joy by throwing a few crumbs, but one can sense his delight. Christianity is finally getting its just rewards. Yippee!

Another Times writer, an Irish Catholic female who looks like Madame Defarge (la tricoteuse in A Tale of Two Cities), Maureen Dowd, has gone one better. She’s called the Catholic Church “a rotten institution,” and never fails to flail the Church and insult Christian believers. Actually, the attacks against the sexual scandals of the Catholic Church would be justified if, say, the newspaper had covered the drug-running and the sexual abuse of the Hasidic order as well, but the Times has ignored it. No wonder the war against Christianity is being won by the secular left—we Christians are sitting on our fannies and doing nothing about it. As an essay on a Fox News website declared, “Christianity is mocked, belittled, smeared and attacked….”

“Mind you, no one reads the Times any longer except oldies like myself, and I only do that in order to find outrageous material that I can write about.”

What is to be done? That’s an easy one to answer. Act like Muslims do when the Prophet is attacked. As a Christian I won’t go as far as those Muslims in Paris who murdered the Charlie Hebdo journalists who had made fun of Muhammad, but I have to admit the French media has not featured any satire of the Prophet since. I wonder what would happen if Christians did react violently at times, especially when papers like the Times ignore the crimes other religious orders commit. Am I advocating violence? Well, violence in defense of my religion I do not see as a vice, and I do not expect seventy virgins and lots of rice in return, either. It is a matter of principle. Jews defend their religion to the extent that the slightest hint against a Jew is seen as anti-Semitism. Christians need to do the same. Muslims certainly do. But what about turning the other cheek, like a good Christian? Or as my wife says, Christianity is not violent. Well, all I can say, and I consider myself a devout Christian, is perhaps it’s time for a change because the deck is stacked against us by so-called newspapers and media of all news fit to print, especially anything that deprecates Christianity.

As I write, a hatchet job on a man called Ralph Drollinger is spread over tens of pages in the Sunday New York Times magazine. His crime: He teaches the Gospel and holds Bible meetings and is a devout Christian who is friends with Donald Trump. Pity the trees that were cut down to print such rubbish against someone even the hatchet-job writer could not pinpoint anything against except teaching the Bible and believing in it and supporting the 45th president.

Mind you, no one reads the Times any longer except oldies like myself, and I only do that in order to find outrageous material that I can write about. If faith is supposed to provide moral guidance, I cannot think of a better one than Christianity, because it is Christians who donate more to charity than other religions—by far—and much more than secular Americans. And churches across America provide a crucial safety net, organizing for food and shelter.

Yep, it’s all about profit, after all, as America’s third-largest restaurant chain recently discovered. The family owners of the Chic-fil-A franchise run the business as a Christian one, paying workers twice the national average, remaining closed on Sundays, and contributing to Christian causes. Their mission, they say, is to glorify God. This has outraged those people who do not share their views. Like giving to the Salvation Army. In Britain, where the Church of England made sure God died long ago, Chick-fil-A has been refused a lease because the outfit “has bitterly divided the people.”

“The people” are the current woke, yelling, screaming types who shut down free speech unless they agree; the same people who sanctimoniously applaud doctors who accept unsupported claims of children who think they’re in the wrong body, and provide sex-changing hormones. The same people who pledged to boycott Equinox gyms because the owner, Stephen Ross, held a fundraiser for Donald Trump.

Have a very happy Christmas, defend our Christian faith, and give your business to Chick-fil-A if you like chicken.