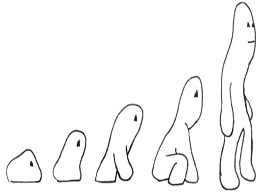 While I’m all for increased awareness of modern America’s sexual dimorphism crisis, we face a much more serious problem—one from which all other social problems emanate like a nasty bathroom smell. I’m talking about the lack of adults in America today. The concept of adolescence was popularized in the 1950s. (It was only discovered in 1904; adolescence didn’t exist at all before then.) The first generation of adolescents liked it so much, they made it the cultural norm for everybody for all time. Marketers love adolescents, adult and otherwise. They’re a perfect helot class in a democracy: People with no self-control are easily led to purchase their identities through consumer products on credit. Totalitarian nanny states love adolescents, because someone has to take care of such people after their parents get sick of them. Big Brother loves ruling over a population of adolescents. You think acting like a superannuated teenager makes you a rebel? It doesn’t; it makes you a conformist. Act like an adult for a day to find out what rebellion against the modern age is.

Being a creature of my time, I was an adolescent until 34, at which point I immediately molted into a very grouchy and hung-over adult, complete with Cap Toe Oxford shoes and a disapproving look. As such, I have experience in these matters and am thus uniquely qualified to offer a Unisex 12-Step Plan to Wrench Americans Into Adulthood:

“Act like an adult for a day to find out what rebellion against the modern age is.”

2) Dress like you have self-respect. Your ironic T-shirt wasn’t funny or fashionable when you were young, sleek, and seventeen; it’s even worse now that you’re wrinkly, fat, and forty. This may seem frivolous, but it isn’t: Fake it until you make it. Wearing a grey flannel suit and rep tie for a day will bring you more spiritual enlightenment than fifty years in an ashram. This has been proven by science.

3) I know it’s been said, but stop wearing your fucking backpack. If you’re not a soldier or otherwise hiking through the wilds looking for a remote campground, you are not allowed to wear a backpack as an adult. Travel is no excuse, nor is bicycle riding. Whatever you have in your backpack, you don’t need to have it with you. Corollary: If you’re not deplaning or a homeless person, you’re also not allowed to drag a wheeled suitcase more than 100 yards. If I had my way, all urban adult backpack-wearers and suitcase-draggers should be pressed into agricultural servitude until they are capable of leaving the house without 40 pounds of junk.

4) Get a job. Work is adulthood’s defining characteristic. Unless you’re a lady or gentleman of leisure, or you’re raising small children, you need a job. If you’re 30 and still in school or “discovering yourself,” you’re not admirable; you are an adolescent birdbrain. Alfred Krupp quit school and expanded the Krupps steel empire when he was 14 years old; what’s your excuse?

5) Get physically fit. Barring crippling disease or injury, there is no excuse for being a flabby lump of protoplasm. Fat people: Stop pigging out on candy and sugary drinks. Skinny manorexics: Grow some muscle or I’ll stuff you into a locker. The few skinny ladies left in the republic: I won’t stuff you in a locker, but I will make fun of your chicken legs and slouchy posture until you get fit.