To Err Is Human, to Detect Divine 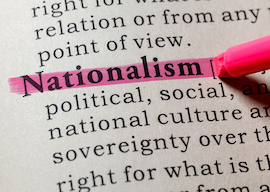 The pedant seeks error, not truth, and delights to find it. Indeed, the search for error may be the entire purpose of his reading, to judge from certain books dating from the 19th century in my possession. In them, the sole mark made by a previous reader is the emphatic underlining, often accompanied in the margin by an explanation mark or some other expression of joyful discovery, of an error, whether of printing or grammar or fact, and of whatever magnitude. The intellectual or moral significance of the error is quite beside the point; it is the fact of error, and of having found it, that is important to the pedant. He is like a predatory animal stalking its prey, pouncing on it when it comes out in the open.

I suppose one is either born pedantic or not, though of course there are different degrees of pedantry. Just as one may be mildly or cripplingly obsessional, so one may be slightly or fulminatingly pedantic. I daresay that one day neuroscientists will put pedants in scanning machines and discover the part of their brains that lights up when they discover an error in a text, and then claim that they have found the pedantry center in the brain.

I am only moderately pedantic, halfway between complete insouciance as to error and seeking error of whatever kind for its own sake. I review books quite often and experience the temptation to make my reviews a list of the errors that I have detected. Generally I resist the temptation, unless the author is someone whose general outlook I reprobate; then I have sometimes found error where in fact no error exists. Pedantry, at least of my degree, is not entirely incompatible with carelessness.

Still, I think that words should be used with care, for the wrong words may leave the wrong impression in the mind and lead to bad decisions. I am hardly original in my view, Confucius thought the same two and a half millennia ago:

“I review books quite often and experience the temptation to make my reviews a list of the errors that I have detected.”

Attendance to language, then, may sometimes be pedantic in the worst sense, but it may also be vitally important.

Yesterday, for example, I saw the following headline:

and at once suspected a misuse of language.

Reading on, I discovered (to my not entirely creditable pleasure) that I was right. The family denied that the murdered boy was a member of a gang, but denial is not refutation any more than accusation is proof of guilt. I do not mean that I had any evidence that the boy in question was the member of a gang, only that the denial by the family refuted nothing. Anything may be asserted, and anything may be denied.

Both assertion and denial require evidence and valid argument. The onus to provide them may, of course, be different. If I am accused of a crime, the onus is not on me to refute the accusation but for the accusation to be proved against me. But if there is evidence against me, mere denial on my part will not be enough. I will have to provide counterevidence, for example an alibi. I could not have committed the act because I was elsewhere at the time.

I have no idea in the particular case of the murdered boy whether or not he was a member of a gang. It is, of course, difficult to prove a negative, and being a member of a gang is not incompatible with any number of other qualities, such as being nice to one’s mother or avidly collecting stamps. But only counterevidence will refute evidence, if there be any; denial alone is not enough. And in the family’s denial there was no element of refutation, only of counter-assertion. Again, this does not mean that the boy was the member of a gang, that the original assertion was true.

The words denial and refutation are nowadays often taken as synonyms, which is why I suspected the misuse of words as soon as I saw the headline. But does the misuse matter?

It may not matter in an individual case; after all, my opinion of the motive for the boy’s murder doesn’t matter in the slightest. But if I—and others—lose the ability to distinguish between denial and refutation, I—and they—coarsen discourse. While words misused may lose their meaning, they may nevertheless retain their connotation, at least for a time. Refutation connotes disproof; and if denial comes to mean the same as refutation, then denial will take on the connotation of disproof. This in turn (as Confucius might have warned us) will mean that discussions become merely assertion and denial of the childish “Yes you did, no I didn’t” variety. It isn’t true simply because I deny it, and after all, my opinion is as valid as yours. Eventually our only method of settling disagreements will be physical.

Every pedant will have his favorite or pet misuse of words to lament. Mine is the conflation of disinterest with uninterest. An uninterest in searching for the truth is not the same as a disinterested search for truth. I am uninterested in sport, but my fascination with, say, Haitian history is disinterested.

Aristotle warned us that we should not demand more precision of words than their subject matter permits; but neither should we demand less.